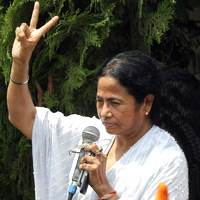 08 November, 2014
Print this article Font size -16+
Positions hardened on rival sides with both the UPA Government and Trinamool Congress on 19 September showing no signs of resiling on their stands, a day after Mamata Banerjee announced her decision to withdraw support to the Congress-led coalition that appears to be confident about its numbers.

Samajwadi Party, a key outside supporter with 22 MPs, kept suspense over its strategy in case of a trial of strength in Lok Sabha in the wake of Trinamool Congress' decision to withdraw support.

A new element in the high-voltage political scenario was Bihar chief minister Nitish Kumar's statement that his party JD (U) will support any party at the Centre which will give special status for his state.

He has been asking for special status to Bihar in view of its backwardness but his statement has intrigued political circles which were wondering whether he was willing to do political deal with UPA.

Should that happen, it will unravel his parties alliance with BJP that heads the NDA.

Prospects of a rapprochement between the UPA and Trinamool Congress which has announced that it will quit the ruling coalition on 21 September receded with the government categorically ruling out any rollback of its decisions on FDI, diesel and LPG cylinders.

Actually, Trinamool Congress supremo and West Bengal chief minister Mamata Banerjee, who had dramatically announced that her six ministers would resign from the Manmohan Singh Government and she will no longer support the Government, stepped up her attack on the Congress party.

"I will stick to my position, come what may...the (TMC) ministers will tender their resignations," she said adding there will be no compromise on people's issue like FDI in retail.

Rejecting finance minister P Chidambaram's statement in Delhi this morning, Banerjee said that nobody from Delhi contacted her before or after the Centre took the decisions to hike diesel price, cap supply of subsidised cylinders and allow FDI in retail.

"Minimum 24 cylinders should be given to a family in a year. How many times you will keep raising the petroleum prices? FDI in retail should be withdrawn," she said in Kolkata.

Grappling with the crisis situation, Prime Minister Manmohan Singh had a meeting with Congress President Sonia Gandhi and other top party leaders and the message that came out of the deliberations appeared to be that the Centre was in no mood to roll back its major reforms decisions.

After a meeting of Group of Ministers on media, Chidambaram told reporters "I don't know why you guys are hung up on that one word rollback. These issues (decisions) were taken after the most careful consideration. They stand."

Indicating that the government was not in a mood to go back on its decisions, he said if any of the Trinamool Ministers wanted to talk to them they will explain the circumstances that compelled the government to take decisions.

In Ahmedabad, commerce minister Anand Sharma said the government does not believe in rollback as decisions were made after much deliberations.

With the parting of ways looking nearly certain, the Manmohan Singh government will have to look for support from two key outside supporters Samajwadi Party (22 MPs) and BSP (21 MPs).

If Trinamool goes ahead with its decision, UPA's strength will come down to 254, 19 short of majority in Lok Sabha, but with the support of outside allies like SP, BSP, JD (S) and RJD it still has the backing of over 300 MPs in a House of 545.

The Samajwadi Party was not making it easier for the UPA with its chief Mulayam Singh Yadav saying its parliamentary board will meet tomorrow to decide its strategy. But his brother and MP Ram Gopal Yadav later said there was no such meeting.

The party’s core committee is discussing various options, according to a person familiar with the development.

Apart from suggestions on raising the cap on subsidised cooking gas cylinders, the leaders also discussed a formula suggested by food minister K.V. Thomas. He proposed that beyond the six cylinders distributed at the subsidised rate of Rs399 each in Delhi, the subsidy be tapered off, depending on the number. For the next seven to 12 cylinders, households should pay Rs 50 more, the 13-24 slab will attract Rs 150 extra and for anything above that, buyers should pay the market rate of around Rs 750.

The Union cabinet on 14 September took a number of decisions, including allowing 51 per cent FDI in multi-brand retail and relaxing a key condition on 100 per cent FDI in single-brand retail, opening the aviation sector to foreign airlines and announcing a round of divestments of government stock in state-owned companies.