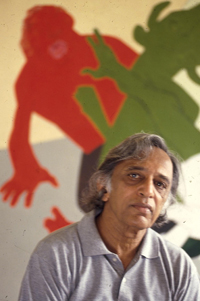 08 November, 2014
Print this article Font size -16+
Modernist painter Tyeb Mehta notched up another record when his oil painting fetched Rs 9.63 crore ($1.8 million) at the recent online Saffronart Autumn art auction, becoming the most expensive artwork to be sold this season.

The 1988 oil on canvas "Falling figure with Bird" is the fourth highest price achieved amongst Mehta's other paintings sold across the world.

The late master's work was among 53 sold works out of a total of 75 works in Saffronart's annual online Autumn auction that featured 35 modern and contemporary Indian artists and raked up a total sales of Rs 21.04 crore ($3.9 million).

Said to be one of the most important ones from Mehta's suite of falling figures, the painting draws on both Indian and Western myths and legends depicting an androgynous human figure entangled with that of a bird.

The figures, locked together in endless free fall, convey not only the anxiety and disquiet that the Mumbai -born Mehta carried with him following his experiences of the horrors of Partition and war, but also his engagement with modernist concepts like existentialism and "Universal Man".

Before the sale Saffronart had said they expected the work to fetch between Rs 8.1 crore-Rs 10.8 crore.

Mehta who died in 2009 was the first Indian artist to break the Rs 1 crore barrier. In the year 2002 at a Christie's auction Mehta's "Celebration" fetched Rs 1.5 crore. In the year 2005 his work "Mahishasura" again crossed the $1 million mark. In 2008 one of his paintings sold for $2 million.

In December 2005, Mehta's painting "Gesture" was sold for 3.1 crore at the Osian's auction.

Previously, in the 2011 Saffronart Autumn Art auction, Tyeb Mehta's "Untitled" was the top lot and sold for Rs 7.19 crore.

Another top attraction in the recently concluded Saffronart auction was a rare work by Amrita Sher Gill.

The rare 1931 painting "Untitled (Zebegeny Landscape)" fetched Rs 3.24 crore falling within the estimated Rs 3.24 -Rs 4.32 crore. The canvas was one of only five paintings by the artist to have ever come up for public auction.

The landscape portrays a grassy path meandering along a thatched wall. While the light in the foreground is dappled, passing through a stand of tall trees on the right, the sky beyond them is a bright, clear blue.

Meanwhile acclaimed modernist painter M F Husain's "That Obscure Object of Desire Eight" fetched Rs 1.17 crores. One untitled work of his went under the hammer for Rs 71.64 lakhs while another was sold at Rs 31.59 lakh.

An untitled Ramkumar work fetched Rs 48.72 lakhs while another of his untitled works went for Rs 27.03 lakh.