Two Buys And A Grand Plan 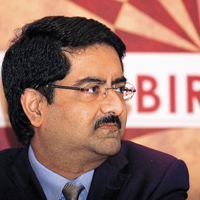 Kumar Mangalam Birla, the 43-year-old chairman of the Aditya Birla Group aims to more than double the revenue of his conglomerate to $65 billion or roughly Rs 2.93 lakh crore (currently, it is $30 billion) by 2015; that will take it to the current revenue size of Tata Group.

On 18 April, the group bought Swedish pulp and fibre maker Domsjo Fabriker for $340 million (Rs 1,530 crore). Two days earlier, it also agreed to acquire the chloro-chemicals division (CCD) of Kolkata-based Kanoria Chemicals & Industries (KCIL) for Rs 830 crore in cash. The Birla group's first deal of the year was the acquisition of Atlanta-based Columbian Chemical Company for $875 million (Rs 3,975 crore) in January. "We will grow through acquisitions and will be driven by what capabilities these acquisitions can give us," says Birla. And this is not his last acquisition. The group will rely more on inorganic growth to achieve the $65-billion revenue target, he says."Indian multinationals such as Tata, Birla and Mahindra are acquiring and absorbing even foreign companies well, when large number of acquisitions fail," says Arvind Mahajan, senior consultant at KPMG.

"The Aditya Birla group is confident of its overseas play after a slew of acquisitions such as Novelis."Domsjo will be ABG's fourth pulp and fibre acquisition after taking over Atholville and Nackawic in Canada, and Jingwei Fibres Company in China. The group is already the world's largest player in this segment, with more than 20 per cent market share. The specialty pulp made by Domsjo is mainly used in the textile industry (viscose staple fibre or VSF, and viscose filament yarn). The only issue in the acquisition is the near total reliance on softwood from outside to make pulp, which analysts say could bring uncertainties. The group's VSF business would go up to $2.7 billion from $2 billion after this buy."This acquisition is in line with our strategy to have raw material — in this case specialty pulp — for our internal consumption," says Birla. "What we are doing across our critical businesses is to gain control over raw material."Deven Choksey, managing director, KR Choksey Securities, likes the fundamental approach of the Birla group in forward and backward integration. "This gives clear focus to the group companies as well as the group," he says. "This will enable the Birlas to sustain even during global uncertainties."

Two foreign companies in the group — Thai Rayon Public Company (Thailand) and Indo Bharat Rayon (Indonesia) — bought Domsjo from a consortium of six people; the Birlas have already taken over the management control. The two acquiring entities will raise $180 million, while $160 million will be sourced as debt in a yet-to-be named special purpose vehicle. Domsjo, with revenues of $390 million last year, has $75 million on its books for ongoing capacity expansion. "Its (Domsjo's) cutting-edge technology and production process coupled with a state-of-the-art bio-refinery, add significant value to our pulp and fibre operations," Birla adds. "Its high quality pulp will enable us to enhance the supply of top-quality premium VSF to our customers."

The acquisition from Kanoria was a quick move. The group finalised the deal in a month, says an investment banker.

After that, the board of Aditya Birla Chemicals (India) approved it. With this acquisition, its total caustic soda capacity will increase from 105,000 tonne per annum (tpa) to 220,000 tpa. The company is a chlor-alkali producer with its plant located at Rehla in Jharkhand. The transaction will be done on a slump sale basis and will be completed by end-May, the company said.CCD is located at Renukoot in Uttar Pradesh and manufactures chlor-alkalis, chlorine derivatives and water treatment chemicals. It is cost-competitive, has the latest technology and captive power. the statement said. CCD's revenues for the year 2009-10 were Rs 303-crore.For chairman Birla, the acquisition solidifies the group's position as India's largest producer of chlor alkali, a critical input in the aluminum business. "Given our large expansion plans for our aluminum business, this serves as an excellent sourcing point," says the young chairman. What next? KPMG's Mahajan says the debt taken on for the acquisitions needs to be cleared before they move on to others. That doesn't look like a problem. Kumar Mangalam Birla is pressing down on the accelerator.