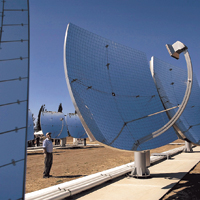 According to Greentech Media, a cleantech market research group in Boston, $1.9 billion was invested in cleantech in the third quarter. However, estimates by the Cleantech Group, a San Francisco-headquartered market research firm, put the figure at $1.59 billion. Both firms' surveys leave out a few but different countries in the world, which is why the results are different. The trend, however, is clear: cleantech is back and will be the hottest sector for investing for many years to come. Says Dallas Kachan, managing director of Cleantech Group: "Cleantech is now clearly the dominant category for VC investing, ahead of biotech and IT."

In the US, the third quarter was an exciting period with some high-profile investments and one highly successful IPO last week by the Boston-based A123 Systems. The biggest sector was solar — according to Greentech Media statistics — with $575 million invested in 29 deals. The other hot areas were biofuels, biomass and gasification technologies. Smart grid, automotive and energy technologies are also getting increasing investments. According to the Cleantech Group, $451 million was invested in solar technologies. Green building technology has emerged as a popular sector for VC investments. The Silicon Valley led the big investments. Solar cell firm Solyndra raised $198 million, riding on the back of a $535 million loan guarantee from the US government. Synthetic Genomics, a biofuel firm based near San Francisco, got a commitment of $300 million from Exxon. Tesla Motor got an investment of $82.5 million from Fjord Capital and Daimler Motors. And Serious Materials, a green building material company, raised $60 million from Mesirow Capital.

The hallmark of the quarter was A123's initial public offering (IPO). The IPO opened on 24 September, and the shares jumped 50 per cent on the first day of trading. The company is now worth $1.9 billion, a valuation that reflects the investor confidence in the sector more than anything else. The performance of the company is reportedly encouraging other companies to do their IPOs. Market observers expect the smart grid company Silver Spring Networks and Tesla Motors to file for IPOs soon. The industry is also getting ready for some mergers and acquisitions. Says Eric Wesoff, senior analyst at Greentech Media: "Consolidation is about to happen in the cleantech sector."

The extraordinary government attention to cleantech is one of the reasons for the resurgence in VC confidence. The US government has spent a substantial portion of the stimulus package on cleantech. Many countries, including India, have also chalked up policies for the sector. The cleantech sector is preparing to follow IT and biotech as a large high-tech sector.