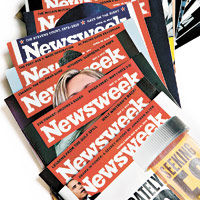 08 November, 2014
Print this article Font size -16+
Newsweek’s new owners think they can succeed at something its previous owners failed at: printing a weekly magazine in the US. IBT Media, the obscure media firm that bought Newsweek in August, said it intends to revive the magazine’s print edition early next year, possibly as soon as January. The announcement is a remarkable twist in Newsweek’s evolution, coming less than a year after its previous owner, IAC, stopped printing the magazine. The brand was basically left for dead — but now the cover of IAC’s final edition, with the phrase ‘#LastPrintIssue’, rendered as a Twitter hashtag, seems decidedly premature. IBT’s decision is at odds with a general industry move away from print and towards the Web.

A Meltdown
ArcelorMittal’s acquisition of a US plant jointly with Nippon Steel and Sumitomo Metal Corp will not affect the world’s No. 1 steelmaker’s debt targets, ArcelorMittal’s CEO Lakshmi Mittal said. ArcelorMittal unveiled the $1.55 billion takeover of ThyssenKrupp’s US steel finishing plant earlier in December, saying it would finance the deal via equity and debt at the joint venture level. Mittal said the deal would have a minimal impact on this year’s debt and no effect on medium-term debt target. The company estimates net debt of $17 billion by the end of 2013, falling to $15 billion in the medium term.

Meanwhile, ThyssenKrupp announced plans to sell 51.5 million new shares as it seeks to shore up funds depleted by a downturn in the global steel market and an ill-advised foray into the Americas. The firm’s ventures comprised a steel slab mill in Brazil and a US finishing plant, but the plan fell apart when Brazil’s currency rose, hiking labour and production costs, and demand for cars slowed.

Motown Blues
In a landmark ruling, Detroit was officially declared bankrupt, clearing the way for potentially sweeping cuts to city worker pensions and retirement benefits and for steep and possibly precedent-setting losses to the cash-strapped city’s bond holders. The federal judge based his decision on the city’s dismal finances and the $18 billion owed to a multitude of creditors. Detroit’s emergency manager Kevyn Orr said the city will seek to file a plan of readjustment — the city’s roadmap to financial solvency — by January. From being the cradle of US’s auto industry, Detroit is now known as the largest bankrupt city in US’s history.

Sticking To His Guns
US President Barack Obama’s health initiative seems fraught with problems, but he’s not giving up. He urged Americans not to be discouraged by the rocky rollout of healthcare.gov and vowed to fix whatever glitches remained as he sought to restore confidence in his leadership. Obama, who has been struggling to contain the political damage from the troubled rollout of the new health law, said repairs to the website have now made it work well for the vast majority of users and that “we’re are going to keep on working to fix whatever problems come up”. He said Republican lawmakers were “rooting for this law to fail” and had offered no alternative to the law other than its repeal, which he rejected as a possibility.

Looking Up
A pick-up in inflation in November eases pressure on the European Central Bank (ECB), and the first fall in unemployment in almost three years shows that a tentative euro zone recovery is gaining traction. This data lent credence to the ECB view that the 17-country bloc is undergoing a gradual economic recovery more than five years after a financial crisis erupted. Consumer price inflation — the rate of increase in the cost of shopping and paying household bills — rose in the euro zone by 0.9 per cent in November, slightly more than economists had predicted. This, as unemployment fell in October to 12.1 per cent from September’s 12.2 per cent, the first fall since February 2011.

Worst Over?
Spain says it has technically escaped a two-year recession by posting feeble growth in the third quarter. But its unemployment rate still hovers at 26 per cent. The gross domestic product edged up by 0.1 per cent in the third quarter of 2013, the National Statistics Institute said. The upward tick snapped an unbroken two-year downturn in activity in Spain, the euro zone’s fourth largest economy. The government is forecasting a 1.3 per cent economic contraction in 2013 and 0.7 per cent growth in 2014.

Running Ahead
German sporting goods maker Adidas is counting on soccer and running gear, among others, to help it achieve profit and sales growth in 2014 and achieve its 2015 goals, the company said. Adidas, the world’s second largest sportswear brand behind Nike, is aiming to increase sales to €17 billion in 2015 and raise its operating profit margin to 11 per cent by then, compared with €11 billion and 7.5 per cent in 2010.

Pumping In Money
Japanese Prime Minister Shinzo Abe’s cabinet approved a $182 billion (18.6 trillion yen) economic package to pull the economy out of deflation, but doubts remain about the economic impact. The core of the package is the 5.5 trillion yen in spending measures Abe ordered in October to bolster the economy. This package has raised concerns that Japan’s government hasn’t broken away from the stop-gap measures and piecemeal policymaking that some say has hampered long-term growth.

Hair Smart
Sony is taking wearable technology to a whole new level. The electronics company has filed a US patent for a ‘SmartWig’, which will use sensors to detect everything from blood pressure to brain waves. The wearable wig could also be used in a number of practical ways, such as helping blind people navigate without any extra assistance,
said Sony.

Gaining Favour
The Chinese yuan overtook the euro in October, becoming the second-most used currency in trade finance after the US dollar, according to global transaction services organisation SWIFT. The market share of yuan usage in trade finance grew to 8.66 per cent in October from 1.89 per cent in January 2012. The US dollar has a share of 81.08 per cent. The top five countries using the yuan for trade finance were China, Hong Kong, Singapore, Germany and Australia.