Turnaround In Just About Three Years 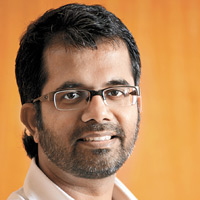 He came, he saw and he conquered. Perfect description for this year's Businessworld-Value Research study's Best Equity Fund Manager, R. Srinivasan, head equity at SBI Mutual Fund. Three years ago, when he joined SBI Mutual Fund as a senior fund manager and took over the responsibility of handling the Magnum Emerging Businesses (MEB) Fund, the fund had recorded a fall of nearly 69 per cent for 2008 and was ranked 41 among the 47 funds in the mid- and small-cap category.

Today, the fund is the best performing one in the mid- and small-cap segment which, for a period of three years, has beaten all equity funds by delivering a return close to 48 per cent. Vasan, as Srinivasan is popularly known among colleagues, convincingly beat last year's winner — ICICI Prudential Discovery Fund — by a margin of over 5 per cent. ICICI Prudential Discovery reported a return of 42.55 per cent in three years.

One being asked about his formula for turning around the fund and taking it to the No. 1 position, Srinivasan says: "I was lucky and my guys (analysts) have done good work." Though he likes to play down his achievements and talks about stocks on which he lost money, his marketing and sales team describes what he has done for MEB as nothing short of magic.

One reason why he plays down his achievements is the inherent nature of the fund — high risk for high returns. His worry is that the fund's good performance can lead to it being miss-sold to investors. "It's a high-risk fund and I don't want it to be pushed to investors who don't understand the risk that they are getting into by investing in MEB," says Srinivasan.

The reason for the fund's success has been lower redemption. "In this fund we pick the 20 stocks that we feel will deliver good returns, with some even doubling in three years, and are not bothered about any other factors. We don't manage risk in this fund. The only risk we manage is liquidity, which is why 25-35 per cent of the stocks are large-cap," says Srinivasan. He has been lucky as his investors have been sticky. "Only big guys with appetite have come into the fund. This was the reason why we were able to take concentrated bets in mid-cap that have been multi-baggers. However, with participation increasing due to good performance, we have increased our exposure to large-cap."

Despite the fund being sector-agnostic and Srinivasan having a free hand in picking stocks — even junk — for the fund, he has not played it blind. "The philosophy of the fund is based on five pillars." he says. He picks stocks of companies that have core competency in the field of their operation. Apart from that the company has to have minimum growth of 20 per cent and should deliver a consistent return on capital (ROC) of 20 per cent over a period of time. Besides, one cannot lose sight of valuation and reliable management.

A double postgraduate in commerce and management, Srinivasan's journey in the equity market started way back in 1992 with Capital Market Publishers. For most part of his career he has been an analyst, which has been his strength. After working with brokerages like Sunidhi Consultancy, Motilal Oswal and WICarr and funds like Oppenheimer, he got into fund management with Principal PNB Mutual Fund. Next, he joined Future Group to build the fund management business for managing public money. But after the split between Kishore Biyani's Future Group and Sameer Sain's Everstone Capital, Srinivasan moved with Sain to build the fund management business. However, with the plans getting deferred due to the fall in the market, Srinivasan left Everstone to join SBI Mutual Fund in 2009. "I was getting bored and was getting paid for doing nothing. Out of sight is like being out of mind and therefore in mid-2009, I joined SBI Mutual Fund," says Srinivasan.

Sain has high praise for his one-time colleague. "Vasan's greatest ability is to keep things simple. He has a clear thought process and can explain complex things in simple words. Apart from being a pleasant person, he has no ego issues which makes him an outstanding fund manager," says Sain.

Srinivasan's ability to accept mistakes and book losses in his investment rather than sitting on them has stood him in good stead. For a period of three years, Srinivasan has generated an alpha of 20.59 per cent, making him the Businessworld-Value Research study's Smartest Fund Manager for 2011-12 as well. Even in the past one year, Srinivasan has been able to generate returns of over 12 per cent in MEB, when the Nifty reported a negative 9 per cent return. Interestingly, a fund that has delivered the second highest return is also managed by Srinivasan. His Magnum Global recorded 9 per cent returns in the past year.

Despite his impressive performance over the past three years, Srinivasan regrets picking Dhanlaxmi Bank. "We thought it could be a similar story like that of Centurion Bank. Amitabh (Chaturvedi) was responsible for building the Reliance AMC (asset management company) business and taking it to great heights. We thought he would convert Dhanlaxmi into a great bank. But it failed," says Srinivasan. He also regrets missing picking up the stocks of Bata and Titan in the past three years. However, it shouldn't bother him as the multi-bagger generated in Page Industries, Hawkins, Goodyear India and Jubilant Foodworks has more than compensated for his misses.

So can Srinivasan continue to maintain his top position? For 2012, the fund has reported a 14 per cent return, underperforming the benchmark BSE 200 that has surged nearly 17 per cent. "You find stocks in a bear market. And today we are short of ideas that can double in 3 years," says Srinivasan who has got defensive as he feels that unlike the past where one could buy on declines, today the scenario is to sell on rallies.