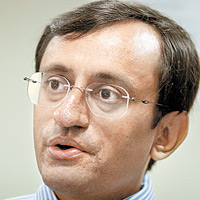 08 November, 2014
Print this article Font size -16+
Rough winds are blowing against Suzlon, the world’s fifth largest wind turbine maker. The debt-laden firm is now faced with the prospects of loan default and possible investor litigation.
On 11 October, Suzlon said the foreign convertible currency bond (FCCB) holders rejected its plea for a four-month extension on the maturity dates for the two series of FCCBs due this month.

Suzlon Energy had issued zero-coupon convertible bonds worth $200 million, and $20.8 million worth convertible bonds, both due in October. The firm is sitting on a consolidated debt of Rs 14,300 crore. Kirti Vagadia, CFO of the Suzlon Group, hopes to arrive at an acceptable solution for all stakeholders soon.
In the past, pharma major Wockhardt and IT firm Zenith Infotech were dragged to the court by FCCB holders for not honouring commitments; and Essar Steel had also defaulted.
Analysts say that one option for Suzlon is to merge with its healthy German subsidiary REpower and bring down the debt on Suzlon Energy’s books. While Suzlon’s total business had a cash balance of over Rs 2,600 crore, cash at hand for Suzlon Energy was Rs 262 crore, as of March 2012. Two more sets of FCCBs worth about $270 million are due in 2014 and 2016.
Suzlon’s troubles started after it bought REpower in 2007, owing to the global slowdown. the company is hoping for revival banking on a current order book of S$7.2 billion. But, for now, times are difficult.