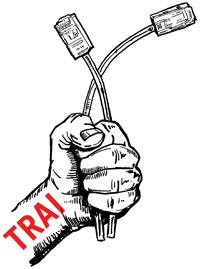 No One Is Spared
Almost every operator has reason to complain. For incumbents the cost of doing business will go up sharply. First, they will need to buy spectrum in the 1800 band at the discovered price. Second, they will want to retain the 900 band in key circles. Third, they will need to re-configure existing networks to match the 1800 band. That would be a neat 50 per cent increase in capital expenditure, by some estimates.

Among incumbents, the hardest hit could be the two state-owned telecom companies — BSNL (Bharat Sanchar Nigam) and MTNL (Mahanagar Telephone Nigam). Trai has mandated that 2.4 MHz of MTNL's spectrum should be withdrawn immediately. Says Anita Soni, CFO at MTNL: "Yes, it will increase our costs since spectrum has been capped at 10 MHz in Delhi and Mumbai." MTNL would need to shell out a minimum of Rs 8,800 crore to get 6.2 MHz of the 1800 band in the two metros alone. This will add to its burdens — it recorded a loss of Rs 2,644 crore during April to December 2011.

The private sector incumbents, too, will need deep pockets. Analysts estimate that Bharti Airtel will have to pay over Rs 32,000 crore, and Idea Cellular Rs 21,000 crore. But once that is done, they can offer 2G, 3G or 4G in that band. This will, of course, depend on how many devices are currently available in each band. A Vodafone executive says, "We believe that several of these recommendations are retrograde and if accepted, will do irreparable harm to the industry." Bharti and Idea Cellular refused to comment on Trai's recommendations.

While the incumbents at least have an established network, new operators whose licences have been cancelled by the Supreme Court (SC) are worse off. While licences of eight were cancelled, Trai has put up only 5 MHz of the 1800 band for auction initially even though it says that 576.2 MHz is available. Just 5 MHz means that only one operator can get that spectrum.

Then, the new operators wanted the auction to be initially restricted to companies that have lost licences. Trai, however, has opened it to all. Says Sarma: "We cannot have an auction for cancelled licences alone. They don't exist as a class as far as spectrum auctions are concerned."

So, it is possible that a new operator will not get spectrum in circles where it is already operational in the 1800 band auctioned earlier. A statement by Uninor says: "It seems obvious that some of these recommendations will create severe negative impact on the entire industry. It is up to the political leadership of India to now ensure that the gains of the past few years of affordable phone calls for India's people are not undone."

Since the SC has ordered the government to hold the auctions by 31 August, there may be another auction of the 1800 band this fiscal year and whose base prices will be the closing price of the first round, making it even more expensive.

Some new operators contest the liberalisation ‘advantage' as well. They only want to be in the 2G space (the low-end market) and so did not bid for 3G spectrum in 2010. A liberalised spectrum will finish their business case. The regulator and the licensor (DoT), however, say the recommendations are progressive. Says R. Chandrashekhar, secretary, DoT: "Liberalised spectrum with complete freedom to use it for any technology for the next 20 years is an important factor."

Apart from the issues of reserve price and re-farming, says Andrew Beale, an analyst at London-based Arete Research, "the proposals are fairly logical, even progressive, with plenty of spectrum, provided operators can afford it."

Among the positive moves is allowing operators to stagger the licence fee payment. They need to pay 25 per cent (for the 800 and 900 bands) initially followed by a two-year moratorium, and then the rest in 10 instalments. Trai has also lowered the spectrum usage charge from 3-8 per cent to a flat 1 per cent. Says a telecom consultant: "These are huge gains and will ensure that there are enough bidders."

According to a UBS Investment Research report, the average spectrum usage charge for Bharti is 4.1 per cent of its gross revenue, and 3.7 per cent for Idea Cellular. This can go below 1 per cent once the operator's entire spectrum is on market-determined prices.

The only gainer seems to be Infotel Broadband Services, the broadband wireless access unit of Reliance Industries. With the  auction for the 700 band slated for 2014-15, Infotel gets a two-year headstart.

The Next Move
The final say on the recommendations, however, lies with DoT and the Empowered Group of Ministers. A former bureaucrat says DoT is unlikely to object to the base price since that can be censured by the Comptroller and Auditor General. But it can ask Trai to revisit the methodology used to arrive at the base prices.

Will the case end up in court? Not immediately, but that can happen once applications are invited for auctioning the 1800 band. Operators could argue that restricting bidding to 5 MHz is against the SC verdict.

If the government sticks to the recommended price, expect bidding by just a few. Already, three operators — Etisalat, S Tel and Loop Mobile — have decided to quit the industry. Such moves can affect investor interest in the Indian telecom sector. Says senior advocate Gopal Subramanium: "When we invite FDI, we need to provide the right assurances."

What the Trai recommendations have done is increase the uncertainty in the industry. But it could also result in consolidation. It all depends on how DoT handles it now.