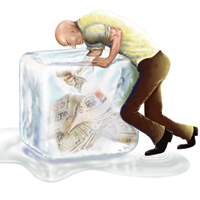 Investor Reena Jain is flustered that her time-tested stock-picking skills are not working in the current stockmarket rally. Her recent selections — Akruti City and Vishnu Chemicals — were moved out of the futures segment to Trade to Trade (T2T) segment by the exchange for high level of volatility, thus restricting trading in these stocks. "I have lost as much as 75 per cent in valuation in these, as my broker does not allow me to trade in these stocks. Now, more than research, I need skills to identify stocks which will be delisted, relisted or pushed into T2T segment," she exclaims.

Along with the regulator, the Securities and Exchange Board of India (Sebi), major bourses, the Bombay Stock Exchange (BSE) and the National Stock Exchange (NSE) are grappling with a new problem — high level of illiquid stocks. These now number around 1,800. While some were being pushed into the delisted category for violation of listing norms and compulsory or voluntary delisting for debt restructuring, others suffer from low float (number of shares available for trading). With Sebi warning members to exercise "extra" due-diligence for trading in these illiquid securities, the lengthening T2T list has started worrying retail investors such as Reena who now questions the superfluous application of these rules.

Raising the flag, Vinay Agrawal, executive director of Angel Broking, says that a stock being moved into T2T is indeed a major reason for illiquidity. Designed to restrict circular trading by traders who use consistent buying and selling of large quantities without a big cash outgo to attract and then exploit new investors, T2T trades require daily large cash outlays to settle, as netting of buy and sell position in the same scrip on the same day is not permitted. These stocks, which are put under extra surveillance for high volatility, also attract a lower meaning when a buyer order is executed (5 per cent circuit limit with 100 per cent upfront margin). Broker margin at the exchange is debited immediately,  forcing them to cut down other trades. BSE has listed these securities under the ‘Z group' and investors are being forewarned about trading in these.

Defining Volatility
Stuck with ‘illiquid stocks' that restrict his opportunities, small investor Anup Trivedi feels that exchanges use surveillance as a reason to act against rising B-group shares without announcing any guideline for such actions. Analysts argue that though exchanges work on the assumption that mid-caps and small-caps are more susceptible to manipulation, it is the derivative segments that are vulnerable — as seen in the cases of Satyam, Core Projects, Educomp, Akruti, Suzlon and Unitech where promoters had complained to the market regulators.

The overzealousness and inconsistency shown by the exchanges in transferring 373 scrips to T2T list (over and above the existing 328 companies), often contravening their own rules, is worrying investors and experts alike. Scrips whose price movement is less than 50 per cent, such as Aksh Optifibre, Sharp Industries, Entegra, Triveni Glass, Asian Electronics, Ceat, Batliboi, Donear and Garware Offshore, were moved to T2T. Also, many scrips were transferred to T2T even when the price rise was 40 per cent — much in tune with the jump in Sensex. This, when scrips such as Sterlite Optical, Sabero Organics and Uttam Steel remain in B group even after rising 50 to 100 per cent. Besides the selection process, experts question the effectiveness of the T2T mechanism. When Akruti rose 150 per cent in five days last March, it was transferred while Reliance Infrastructure which rose by 200 per cent in three sessions did not meet the same fate.

Marking The Market
In times of unusual volatility, global exchanges use the market discovery price mechanism without keeping any price bands. It is no different in India, but its application is seldom justified. In January 2008, indices collapsed over 60 per cent, yet exchanges explained it as a market discovery mechanism and no changes were made in the price bands. Nor was any scrip transferred to T2T. Yet between April and July, when some of the B-group stocks hit lower circuits consistently, filter limits were arbitrarily lowered to 5 per cent. But no action was taken against many A-group stocks which were collapsing by as much as 40 to 50 per cent. However, the same principle was not applied when trading was halted for a day after the market rose 21 per cent post-elections.

On both occasions, retail investors suffered losses due to the artificial illiquidity created by circuit filters. Investor protection groups point out that the 2008 crash had resulted in the biggest-ever payment crisis after May 2006 as brokers dumped shares without client approval.

Trivedi says that illiquid stocks in the de-listed space remain a riddle for investors like him. The delisting and re-listing drama was seen last in the GKW stock that was suspended on 24 June at Rs 38.15, as per mutual understanding only to be re-listed on 20 July at Rs 58 with a mere trading volume of 2,857 shares. In the next four trading sessions, it moved up by 518 per cent to Rs 285, yet it remains in the 20 per cent circuit limit.

Investors want uniform rules and deadlines for shifting shares out of T2T. Exchanges say a three-month window is usually applicable for all ‘illiquid' category, though this is not true in the case of delisted stocks. "The regulator and exchanges must have an alternative mechanism to penalise in case of non-compliance of the regulatory requirements, instead of pushing the stock into T2T settlement," says Bhavin Desai, manager of derivatives at Motilal Oswal.

Changing Rules
Investor Grievance Forum says there should be a defined set of rules on how long a stock should remain in T2T for each segment and how investors can be compensated for the losses. "What do exchanges expect from corporates? Artificial volumes? These will be liquid if they are transferred to normal groups," says Kishor Oswal, chairman of CNI Research in Mumbai.

Agrawal of Angel Broking suggests a separate exchange or segment that may deal only with illiquid stocks, while Desai wants professional market makers who can provide opposite quotes to sustain volumes with few concessions on the regulatory costs and financing costs. "In case of lack of tradable stock, firms should be mandated to have certain percentage of the equity as free float for smoother trading. Regulatory requirements should be tightened to have minimum amount of issued capital required for smoother trading. The firms lacking this should be induced to heighten the equity within the stipulated time," he says. According to D.D. Sharma, senior vice-president of research at Anand Rathi Financial Services, "In future, you may have stiff listing requirement with regard to size of companies with total equity and float available."

With over 1,800 stocks in the illiquid space, the BSE has shrunk its spectrum of traded stocks by almost 45 per cent. Already behind the NSE in both cash and futures market, the BSE has so far failed to enliven its derivative segment. Defreezing some of these stocks could improve cash flow and the charm may return to the BSE.