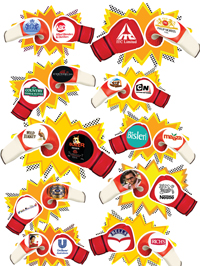 08 November, 2014
Print this article Font size -16+
The share of brand disputes in Indian high courts have hit an all-time high. Nearly 85 per cent of all intellectual property (IP)-related disputes at the Delhi High Court have a brand at the heart of the matter. And Delhi accounts for nearly 80 per cent of all disputes concerning brands across the country, according to a veteran lawyer. This is not because the brand managers expect ‘capital' punishment for offenders.

Clashing over brands seems to be in vogue. As a recent spate of instances show, there is no shortage of brands willing to drag their rivals, copycats or call them whatever, to court. Some of these are serious cases of brand infringement, while others are less serious — not that any brand manager will admit his case is trivial. One reason for increased brand litigation is the cost of developing a brand name and identity amidst the sheer clutter of the market. When you are spending so much to build a brand — and it is so much more expensive than earlier — you would want to move court to protect it.

The list of litigants, or defendants in some cases, read like the Who's Who of the corporate world. Consumer goods giants Hindustan Unilever, Procter & Gamble, ITC, Godrej, Philip Morris, Coca-Cola and Nestle are among those who have all figured or continue to feature in the list of firms fighting over brands in courts.

On the face of it, all brand disputes seem to point towards fast moving consumer goods (FMCG) — a segment that has seen the maximum proliferation of brands over the past 2-3 years. However, legal firms such as the Gurgaon-based Lall Lahiri & Salhotra (LLS) point out that the FMCG disputes get widely noticed because of the average consumer interest and widespread media coverage.

Well, who would look away when a pain relief brand, Zandu Balm, featured in a song in the successful Hindi film, the Salman Khan-starrer Dabaang, becomes the topic of a legal dispute? As brand managers were debating whether this was one brand placement that had cracked the success code, the owners of Zandu brand were not amused. They have reportedly sent a legal notice to the movie producers for using the word Zandu Balm in the number ‘Munni Badnam Hui' without the firm's nod.

LLS itself has played its part in some high-profile consumer goods cases such as Coca-Cola India versus Ramesh Chauhan's Bisleri over the mango drink, Maaza, or the GlaxoSmithKline Consumer Healthcare India versus Heinz India cases over the advertising war between their respective brands Horlicks and Complan. But Anuradha Salhotra, managing partner, LLS, points out that some of the brand disputes currently under litigation include every category from car makers, hotels, health clubs, cement and pharmaceutical companies.

Most disputes are being taken to court with the expectation of speedy resolution — in some cases, where both parties arrive at an out-of- court settlement, the matter is closed in as little as 15-30 days. Some years ago, brand disputes would drag on for 4-5 years. Now, the average tenure for a dispute resolution is 2-3 years. Though this period is still higher than the international average of 18 months, courts in India are working towards bringing resolution time in line with international standards, according to legal experts.

Moreover, most litigants are now expecting ex parte injunctions (relief without the presence of the defendants). In one recent instance, the Bombay High Court passed an ex parte ad interim (temporary) injunction in favour of Godrej Consumer Products (GCPL).

GCPL took a Himachal Pradesh-based company, Gandhi Soaps and Detergent Industries, to court because Gandhi Soaps was selling a toilet soap, branded Gandhi No. 1, that was allegedly identical to GCPL's largest selling toilet soap brand Godrej No. 1. The similarity was apparently not just in the brand name, but also the packaging, brand colours and the font used. The high court restrained Gandhi Soaps from using the trademark Gandhi No. 1, apart from manufacturing and selling the soap.

Hit Where It Hurts
It is not only encroaching on someone else's IP that is driving companies towards legal redressal. Some are even contesting the claims made by competitors in court. Take the recent case between consumer good giants Procter & Gamble and Hindustan Unilever, where HUL claimed that P&G's detergent Tide was making unfair claims of sandalwood and lemon in its washing powder. The case seems to have been settled with the court passing a verdict in favour of HUL (see ‘In Combat Gear' on page 62).

There are an equal number of companies that are also protecting every aspect of their brands, and packaging from potential abuse. "Companies are increasingly building on large portfolios of various trademarks to protect," says Ranjan Negi, partner at law firm Amarchand & Mangaldas & Suresh A Shroff & Co., who heads the firm's intellectual property practice. Negi elaborates that, in the past, companies would have only guarded the logo, but now they even apply for trademarks in areas that would have earlier been registered as copyrights.

For instance, firms are registering stylised fonts, colour schemes, package design, and so on, separately. There are statistics in favour of that point. According to data from the Controller General of Patents, Designs & Trade Marks, the number of trademark applications have gone up from 78,996 in 2004-05 to 130,172 in 2008-09.

As a dispute involving consumer goods maker Reckitt Benckiser, the owner of brands such as Dettol and toilet-cleaner Harpic, illustrates packaging features can become a strong point of contention. Reckitt Benckiser recently dragged retailing joint venture Bharti-Walmart to court as the retailer has allegedly copied the package-and-cap design of Harpic for its private label toilet cleaner. The matter is sub judice.

Support Legal Action
It is no rocket science on why everybody is making a beeline for the Delhi High Court to present their brand's case. The city has an active intellectual property rights bar, and offers, arguably, the best support systems to take up a cause for the brand. As an earlier Businessworld report (‘Lords Of IPR', 2 August 2010) points out, several law firms that specialise in brands and trademarks (intellectual property) issues are mushrooming across the country. But the best of them are in Delhi. That is, however, only half the story.

A senior counsel says another role — which has had more brands approaching courts — is that of the judges themselves. "The enlightened judiciary in the Delhi High Court could appreciate the nuances of branding and were well versed with international standards, This resulted in some landmark judgements," says a senior counsel. According to senior legal experts, while this was the story for the Delhi High Court till some months ago, all the other high courts in the country have now become equally competitive. "There are interesting times ahead in the field of IP law practice," says the counsel.

The other side of the trend is the emergence of several business intelligence and investigative service agencies who partner law firms in their bid to identify the guilty. Some of them, such as the Mumbai-based EIPR, are particularly involved with issues of brand counterfeiting and piracy, while others such as the Gurgaon-based Hill & Associates deal with business intelligence. "Trademark lawyers work along with investigation agencies," says Negi of Amarchand & Mangaldas. Salhotra agrees that there is an active support system, which is now building itself around brand disputes.

Value Addition
Lawyers say companies are increasingly looking at asserting their brand power. "A lot more companies are realising the value that brands bring to the table," says Salhotra of LLS. A. Mahendran, managing director at GCPL concurs to the point. "There is a race for people to assert their brand identity," adds Negi.

However, that will be a very simplistic stance to take. One big reason why people are fiercely guarding their brand identities is that valuations of companies are increasingly placing a huge emphasis on brand value. As Lall herself told BW sometime ago, companies such as Sony have valued their trademark to be five times more valuable than their tangible assets.

Indian firms might be taking steps in bringing offenders to book, but there is still some way to go in recovering damages that arise from a dispute. Most firms seek legal recourse to only stop their rivals or the guilty from proceeding with whatever they are doing. "Most of them are tackling it only as a prestige issue. Damages are not yet the norm," says one lawyer. As an alternative to quantifying goodwill of the brand under contention — which itself could lead to another point of dispute — Salhotra recommends a remedy could be in asking for counter profits.

The bottom line of the debate is that brand disputes are here to stay. "They have always been around. It is only now that they are getting more widely noticed," says Negi. Considering that companies spend huge amounts trying to protect the value of their brands, it is very likely that you will soon hear about those pronounced guilty in a brand dispute paying through their nose. But that is another story altogether.