Traders Rush To Buy Gold Ahead Of Budget 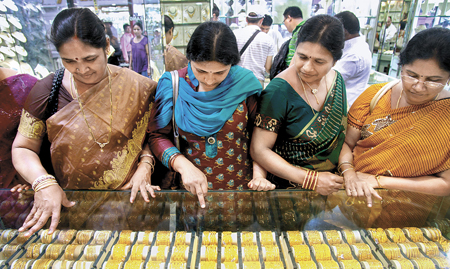 08 November, 2014
Print this article Font size -16+
Indian traders rushed to buy gold on worries the government may take more steps to curb soaring imports of the precious metal when it presents its budget later this month, while Chinese buying eased from levels seen earlier in the week.
Alarmed by a mounting current account deficit, India moved to rein in its gold imports -- second only to oil in value -- by raising duties to 6 per cent from 4 per cent in January.
But traders snapped up supplies ahead of the duty, sending India's gold imports last month to their highest in 1-1/2 years and undermining the government's efforts to control the ballooning deficit that hit a record 5.4 per cent of gross domestic product in July-September.
"Most people in the market are concerned about policy changes in the budget," said a Mumbai-based dealer.
"Some sort of measures to curb gold imports can be there, that's why bullion players, especially jewellers, are increasing their stock levels."
Spot gold held steady around $1,605 an ounce by 0808 GMT, near a six-month low just below $1,600 hit last week, as physical demand from Asia was offset by ebbing interest from other regions on indications of an improvement in the global economic outlook.
China Buying Cools
China, the world's second-largest gold consumer after India, has been actively buying since its markets reopened on 18 February' 2013 after a week-long Lunar New Year holiday during which gold dropped more than 3 per cent.
But buying interest has cooled since then even as gold has failed to rebound far from the six-month low.
Trading volumes on Shanghai's two spot gold contracts and spot deferred gold contract on Tuesday halved from the previous session to 34,201.4 kilograms, after counting both sides of transactions, official data from the Shanghai Gold Exchange showed.
On 20 February' 2013, turnover on these contracts stood at 34,506 kg so far.
"We still see physical demand coming in, but it's not very strong as the trend in gold is still bearish and people are more interested in other markets," said Peter Fung, head of dealing at Wing Fung Precious Metals in Hong Kong.
In Hong Kong, the main conduit for gold to enter China, premiums stood at $1.20 to $1.70 an ounce above London prices, a touch up from before the Lunar New Year, dealers said.
China's consumer gold demand, including that for jewellery, bars and coins, held flat in 2012 at 776.1 tonnes, beating a 4-per cent drop in global gold demand, the World Gold Council said in its quarterly report.
In Japan, traders reported a mix of selling and buying at retail levels, and prices were nearly on par with global prices, compared to a small discount earlier in the month.
"We see mixed flow from investors, with some taking profit and some buying as new investment," said a Tokyo-based trader, but adding that the return of appetite for gold investment is still in its early stage.
Week Ahead
Gold market participants will closely watch India's budget for fiscal year 2013/14 due February 28, which could reveal more measures to discourage bullion imports by the top consumer.