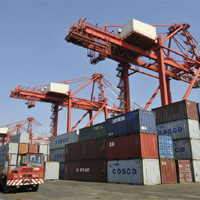 08 November, 2014
Print this article Font size -16+
India's trade deficit narrowed in June to $12.24 billion from a 7-month high, helped by a slowdown in gold imports, which should ease pressure on the current account balance and the beleaguered rupee.

India's exports contracted by 4.6 per cent, for the second consecutive month, to $23.79 billion in June 2013 compared to that in the year-ago period.

Gold and silver imports in June decreased to $2.45 billion from $8.4 billion in May.

"Decline in gold and silver imports could be attributed to the steps taken by the government and the RBI," Pujari said.

Indians' hunger for gold has made it the second biggest item, after crude oil, in the country's import basket. To tamp down gold demand, Indian authorities last month took a slew of measures including a 2 percentage point hike in import duty.

Those measures appear to have worked as the growth in gold and silver imports slowed to 22.8 per cent year-on-year at $2.45 billion last month.

Gold and silver imports had jumped an annual 109 per cent in April and May combined as retail buyers tried to take advantage of sliding global prices.

Overall, merchandise imports rose about 0.73 per cent to $36.03 billion, the trade ministry said on Friday. Exports fell 4.57 per cent from a year earlier to $23.79 billion, their second straight monthly fall.