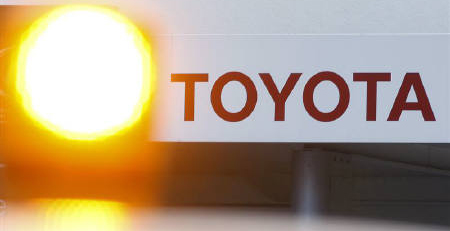 08 November, 2014
Print this article Font size -16+
Toyota Motor Corp is hitching its future to green cars, investing billions of dollars in gasoline-electric hybrids and fuel-cell vehicles, but for now its record profit performance is being powered largely by a gas-guzzling US market.

In the United States, relatively cheap gasoline prices helped to spur brisk 9 per cent growth in industry-wide light truck sales in the first half of the year, making that one of the fastest-growing major global market segments - accounting for about one-tenth of global vehicle sales.

Toyota outperformed the overall US market, moreover, with its fresh model line-up - the Highlander SUV was redesigned in February and the Tundra pick-up got a facelift last September - powering a 10 per cent rise in its January-June US light truck sales to nearly half a million vehicles.

That success is feeding the nearly $40 billion cash pile that Toyota will tap for future green car investments.

"The US is one of the few bright spots contributing to year-on-year profit growth for Toyota while it faces a slowdown in places like Japan and Thailand," said Koichi Sugimoto, an auto analyst at Mitsubishi UFJ Morgan Stanley.

Light trucks, a category that includes SUVs, accounted for around 42 percent of Toyota's total US sales in January-June, which were up 5 per cent from a year earlier.

The strong showing continued in July, when Toyota's total US sales rose 12 per cent due to robust SUV demand and larger discounts, outperforming the industry's 9 per cent growth and surpassing Ford Motor Co to become the No.2 seller for the month.

Analysts forecast that Toyota's April-June North American operating profit jumped at a double-digit rate from the same period a year ago, with Barclays auto analyst Tatsuo Yoshida putting the figure at 106 billion yen ($1.03 billion), up 30 percent year-on-year. The company will announce its first-quarter earnings on Tuesday (05 August).

Toyota's North America numbers undercount the region's actual contribution to profits, since they exclude much of the profits made from imported vehicles. Most of what Toyota earns through exports from its home country are counted with Japan profits, which likely fell in April-June due to a sales tax hike in April that dented domestic sales.

Barclays' Yoshida forecasts Toyota's Japan operating profit at 381 billion yen for the quarter, a 16 per cent drop. In Asia, he expects a 12 per cent decline to 92 billion yen.

Lucrative Light Trucks
Overall operating profit at the world's biggest automaker is expected to drop 4 per cent in April-June to 637.3 billion yen from the same period a year ago, according to the average forecast of 13 analysts surveyed by Thomson Reuters.

For the full year to next March, Toyota forecasts its profit will edge up 0.3 per cent to 2.3 trillion yen, extending last year's record high.

Bigger vehicles such as light trucks tend to be more profitable than small cars.

For this financial year, Toyota is likely to make an operating profit of around $2,500 on average for every light truck such as the RAV4 or Tundra it sells in the United States. The figure for passenger cars such as the Prius or the Camry, Toyota's best-selling car in the United States, is about $1,500, said Koichi Sugimoto, an auto analyst at Mitsubishi UFJ Morgan Stanley.

While Toyota reaps hefty profits from US light trucks, its sales of the Prius, the world's best-selling hybrid car, slumped 11 percent in the United States in the first half of the year.

Unlike Toyota's US light truck line-up, the flagship Prius has not seen a model change in five years. But its fortunes are set for a boost as Toyota readies a fourth generation of the hybrid to hit showrooms as early as next year.

Toyota introduced the Prius in late 1997 and endured years of losses to establish dominance in the segment. After selling more than 6 million hybrids over 17 years, Toyota says it is now earning money on the Prius and aims to make its hybrids as profitable as its gasoline-engine cars.

Toyota will further burnish its image as a green technology pioneer next year when it readies a fuel-cell vehicle for launch by end-March.

But for the rest of this financial year, it's big gasoline-engine vehicles that will be underpinning Toyota's profits.

"They are 15 per cent share of the US market and they've got to sell what the market buys, for sure," said Kurt Sanger, autos analyst at Deutsche Securities in Tokyo.