Towards A New Crisis 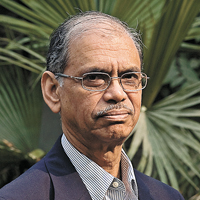 08 November, 2014
Print this article Font size -16+
As we approach the fourth anniversary of the financial hurricane that nearly wrecked the world economy, dark clouds are gathering once again. Europe is seized with a renewed fear of euro zone collapse and as the US recovery continues to show signs of stalling, the slowdown of the Chinese economy is pushing the world towards a new crisis. A hard landing in China could expose a large number of countries to unforeseen consequences and dash hopes of a global recovery. China’s plight also drives the final nail into the coffin of the once fashionable theory of “decoupling”, which argued for an autonomous economic sphere around China that could soar even as the US economy went into a tailspin.
In the dark days of 2008-09, following the collapse of major financial institutions, China stood out as a beacon of hope, the biggest engine of global growth. Buoyed by Beijing’s $586-billion economic stimulus package in November 2008, the Chinese economy bounced back and was soon growing at its customary 8 per cent clip.
The stimulated growth that cushioned the economy from the impact of falling export demand has, however, run its course. High inflation and the stimulus-fuelled real estate bubble have been aggravated by sagging global demand. Europe’s appetite for Chinese goods has fallen sharply, roiled by the deepening sovereign debt crisis. With high US unemployment and fears of recession, demand in China’s biggest market is similarly flat. If Beijing were tempted to depreciate the renminbi in a bid to boost exports to the US, it could trigger an ugly row, especially in an election year.
The impact is being felt all across China. Car dealerships are bursting with unsold automobiles, warehouses are groaning under mountains of unsold goods, and millions of apartments remain vacant.

In a bid to liquidate inventories, companies are engaging in vicious price-cutting wars. Latest data show that export orders are falling at their fastest pace since the 2008 crisis. Cutbacks in import orders by Chinese firms are now spreading gloom to three continents. Germany, Europe’s export engine, sells much of its machine tools and equipment to China, but is seeing a fall in GDP growth. The sovereign debt crisis, which has hit European banks, has indirectly affected China’s exports to poorer countries as well. The emerging economies of Africa and Latin America rely heavily on European banks for trade financing, but the lenders have stopped issuing letters of credit.
China’s export engine consumed about 20 per cent of the world’s non-renewable energy, 23 per cent of major agricultural crops, and 40 per cent of base metals. Not surprisingly, the Chinese slowdown has hurt Australia, Brazil and African countries, which have been feeding China’s export engine with raw materials like metals, agricultural commodities and petro-chemicals. As one official of a major Brazilian iron ore company put it, with Chinese slowdown the “golden years” are gone. Australia’s BHP Billiton has abandoned plans to build the world’s biggest open pit copper and uranium mine and hopes of creating thousands of jobs have been dashed. The fall-off in orders for Chinese consumer goods also transmits the pain to South Korea, Taiwan and a host of other countries engaged in the manufacturing supply chain. Japan’s export of heavy machinery has, for example, slumped, leading, in turn, to a drop in the country’s imports of commodities.
Given the extent to which global demand has contracted, China’s main avenue to avoid a hard landing is by engaging in a domestic decoupling of sorts — by moving away from export-driven investment to consumption-driven growth. In the past five years, China has introduced pension and health insurance in a bid to encourage greater domestic consumption. Worried about medical burden and old age, the Chinese have traditionally saved more than they consume. However, persistently high private saving rates suggest limited success in changing economic gears.
As China struggles to rebalance its economy and its manufacturing sector stalls, the resulting lower global commodity prices could provide a silver lining to developing countries not endowed with these resources. Weak demand from China could also lower the price of oil and divert some FDI flow away from China. Thanks to strong FDI inflow, China, with its $3.2-trillion reserve, is better prepared to face the storm; but its falling current account surplus has shown that its fortune is not decoupled from the rest of the world.

The author is director of publications at the Yale Center for the Study of Globalisation, and Editor of YaleGlobal Online
boundtogether(dot)bw(at)gmail(dot)com