Towards A More Connected Future 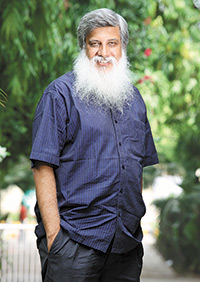 08 November, 2014
Print this article Font size -16+
Urbanisation in India has thrown up unique challenges. One of the most critical among them is how to house the large numbers that move into cities every day. The government’s one-stop solution for managing slums and unauthorised settlements has been the Jawaharlal Nehru National Urban Renewal Mission (JNNURM). But is it enough to provide subsidised housing? Can basic infrastructure like transport, water and sewage be ignored? Or, can the government depend on the private sector to take care of them? Partha Mukhopadhyay, senior research fellow at the Centre for Policy Research, raised these issues in an interview with BW|Businessworld. Edited excerpts:

How do you view urbanisation in India?
In India, we use a definition of urbanisation that is most unique. In terms of size, density and economic activity, a settlement has to have over 5,000 people, more than 400 people per sq. km. and three-quarters of the male working population in the settlement must be engaged in non-farm activities.

We are the only country that defines urbanisation along such parameters. So, it is pretty hard to be urban in India in that sense.

Do such settlements have to be near big cities?
Most people are under the impression that urbanisation occurs in and around large cities. That is not true. Currently, only about 31 per cent of our population is in cities with over 1 million people. In fact, if you look at the proportion of the urban population living in cities that already had over a million people in 2001, it has actually gone down. This is because other places have grown faster. The notion that hordes of people are migrating to big cities is not entirely supported by the available data.

In fact, the data indicates that there is not much migration in India. Of the 90 million who became urban dwellers between 2001 and 2011, about 40 million were born in urban areas, 30 million got the tag due to morphing of places, i.e., the change in the economic character of the settlement, and only about 20 million migrated.

Why is there a perception that Delhi, Mumbai and other metros are brimming over on account of a rural influx?
Delhi, for instance, is adding numbers far slower (in comparison to other metros). Between, say, 1970 and 2000, it grew over 4 per cent since 1951 and in the last 10 years, the growth rate has dropped to about 2 per cent.

How did that happen?
Delhi has not shown any dramatic growth, but peripheral areas like Gurgaon have grown sharply. In Mumbai, the population of the city has remained almost flat, while outer areas like Thane have shown a growth of around 3.5 per cent. Kolkata and other metros also have not shown much growth. So, it appears that the population growth in the core cities is, in fact, slowing down.

The only city that has shown strong growth is Bangalore. It has grown at an annual rate of about 5 per cent for the past 10 years.

What are some of the emerging urban centres?
We now have more than 50 cities with over a million people spread across 18 states. Urban growth in India is taking place pretty much across the country. It is no longer just about Delhi, Mumbai, Kolkata, Chennai, Bangalore, or even Hyderabad, Pune and Ahmedabad.

What are the challenges that such urbanisation throws up?
Only Maharashtra and Gujarat offer some functional autonomy to their cities — Mumbai and Ahmedabad, respectively. Few cities actually have a functioning mayor and a council system. The cities are mainly managed by various state agencies, which don’t always function perfectly. This is partly because the capitals of states don’t want a parallel authority just as powerful as the state chief minister. A strong mayor can well be a political rival. For instance, the mayors of Paris have often gone on to become the president of the country. This may be the reason why chief ministers are reluctant to cede powers in capital cities.

Be that as it may, it’s a problem, as in that case the authority to take decisions rests on the city commissioner. But commissioners do not stay for an extended period of time — two to three years at best. Therefore, there is a structural problem with the agencies that manage our cities. Delhi is somewhat of an exception, but even in Delhi, land and police are not with the state government. It is due to this governance structure that there is a lack of trust among people for city employees.

How can the government handle affordable urban housing better in cities like Delhi and Mumbai?
It has to plan better. Connecting affordable housing with the public transport system is key. Take Delhi, for instance. We built the Metro at approximately the same cost as the Golden Quadrilateral highways, which means that connecting Delhi cost as much as it did to connect India. If you look at Metro stations in other countries, they have a large number of low-cost housing units around stations.

In Delhi’s metro stations, much of the area is reserved for parking. It is so because the Metro is not integrated with the rest of the public transport system. But, over time, the idea is to get more and more of the city to move around the Metro. Globally, cities try to get low-cost housing connected to the Metro system. In Delhi, the JNNURM housing is in far-flung areas. Besides connectivity, people have to be provided with other basic services such as water, sewage clearance, schools and hospitals. Forget jobs.

If you look at the JNNURM housing story, about 1.4 million houses were sanctioned, of which 8,30,000 have been built so far. But only about 6,00,000 are officially recorded as occupied. The remaining are not. This is because they have been built badly or don’t have basic facilities or are simply impossible to get to. You have to plan infrastructure if you want to relocate people from slums to these houses. I am not sure how well the JNNURM can work unless some of these issues — transport, location and sewage — are taken care of.

People in slums work in industries, so if you try and make these slums disappear overnight, the economy of the city will collapse. So, instead of trying to relocate them to uninhabitable locations, if you offer the residents some security in terms of land tenure, you will find the residents making investments. There are around 1,200 unauthorised colonies in Delhi that are to be regularised. The government was supposed to make investments in infrastructure in these colonies, but not much has been done (a recent CAG report also came to this conclusion).

In a way, let people fix their own problems. We provide them tenure rights and let them invest in facilities they need to make the place livable. I believe it is a better option compared to what the government is trying to do — putting them in heavily subsidised housing in some corner where no other facilities are available.

But everything cannot be done by people themselves. For instance, we have no public provision of low-cost rental housing in India. This is something we need to look at and offer in the new urban centres. The government has been reluctant to take this on. It tends to lean on the private sector for anything that it cannot handle itself.

They can’t always say: “We can’t do this, let the private sector take this on” or “We can’t do that, let CSR by companies take care of this”. The government has certain powers and it cannot run away from its responsibilities. There is this abdication of responsibility, but it seems acceptable to everyone. If we don’t want to hold the government responsible, how can we progress?