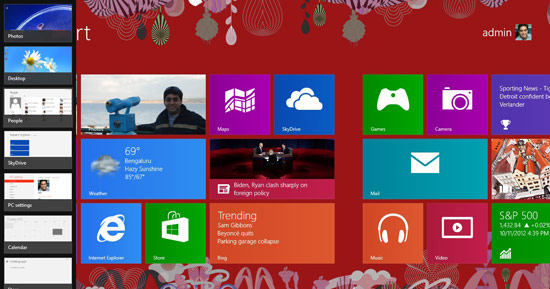 08 November, 2014
Print this article Font size -16+
As you read this, many of you are starting to have your first brush with Windows 8, Microsoft’s big bet on a unified PC and tablet experience. I’ve had some quality time playing around with the final release of Windows 8, albeit on Windows 7 hardware. The tablet I used did double duty as a PC with the addition of a keyboard and mouse, giving me the chance to take Windows 8 out for a spin in both its avatars — touch-only and as a traditional PC. Here’s what I came away with…
It’s clear from the get go that Microsoft designed Windows 8 as a “touch-first environment”. Put simply, what that translates into is that to fully understand and appreciate the new user interface, you need to use it on a multi-touch device. Once you do, it starts to make sense. The picture password login options, the large touch-friendly live tiles on the bright bold Start screen, the various gestures that bring up the multitasking Switcher view, the Charms bar and the slide-up apps menus — all invite interaction via touch and there’s a lot to like once you get used to the nuances of this new touch platform.
Of course, this isn’t much use to you if you’re on upgrading to Windows 8 on a traditional desktop or non-touch notebook, even if it meets the modest (and quite similar to Windows 7’s) hardware requirements. I put the device in front of tech savvy family members and gave them the keyboard and mouse to go about doing their everyday tasks. I found them constantly bypassing the Start screen to get to the Desktop, and once there, frequently looking for the Start button, which no longer exists. Here’s the thing - muscle memory will probably be your worst enemy on a Windows 8 desktop. Sure, there are keyboard shortcuts and mouse movements to achieve what you need to, but without a touchscreen, the Modern UI just feels like a cumbersome extra layer. This “two-headed beast”, as some refer to it, may prove to be quite the challenge for upgraders and many Windows old-timers.
Of course, I fully expect that in the coming weeks, you will see a lot of hardware and a whole host of apps that can truly help make sense of and give context to the new user interface, and showcase Windows 8 as a productive, usable environment albeit the massively disruptive nature of its interface. Either that or Microsoft will see an outlash far worse than what happened with Vista. For the sake of innovation and the entire PC industry, I hope it’s the former.