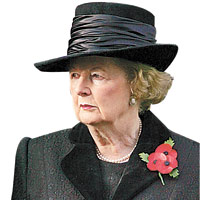 08 November, 2014
Print this article Font size -16+
Some say she helped invent the soft-serve ice cream. If she actually had, that would perhaps be the only soft spot in Margaret Thatcher’s resume. For, the Iron Lady of British politics, who  died on 8 April, was known for her tough stance on economic policy and international relations. She was prime minister of the UK from 1979 to 1990 and her liberalisation measures, which many named ‘Thatcherisms’, were later adopted by many countries. Global opinion on her is so polarised that while her fans say she turned around Britain, her foes feel she ruined the welfare state.  Well, polarising opinion is arguably a key trait of exceptional leaders.
A New Innings
Soon, there will be more Sachin Tendulkar on your TV screen.  The cricketing legend will appear on a 3D animation comedy adventure series, Master Blasters. The show will feature a Sachin avatar mentoring 12 young cricketers.  Season one of the series will have 26 episodes of 22 minutes each. The show is produced by Shemaroo
Entertainment.
Nifty Move
For the first time in its 20-year history, the National Stock Exchange will have a woman at the helm. A Carnatic music buff, Chitra Ramkrishna is the new managing director and CEO of the country’s largest bourse by turnover and trades. She was joint MD of the exchange. She holds a degree from the Chartered Institute of Management Accountants, UK, and is a member of the Institute of Chartered Accountants of India.
Father Figure
Robert Edwards, whose research on in vitro fertilisation led to the birth of the first test-tube baby, died aged 87 on 10 April in the UK. Around five million IVF babies have been born so far. Paying tribute, the world’s first test-tube baby, Louise Brown, said she had lost a “grandfather”.
Tit For Tat
Chinese sportswear-maker Qiaodan Sports said it was countersuing US basketball legend Michael Jordan for $8 million in damages after he filed a lawsuit accusing the firm of using his name without permission.
Lacking Sahara
Despite the bad press and the legal wrangles, Sahara Group chairman Subrata Roy exudes confidence. “We won’t give up,”he says. “We have been the target of Sebi for no reason.” But the market watchdog, which questioned Roy this week,  said it would seek the sale of key Sahara properties across the country as the company did not comply with its orders to pay back money it had taken  from thousands of investors as part of certain schemes.
Riding In
Will it be a win-win deal as many term it already? One cannot be sure if the tie-up between Venu Srinivasan-led TVS Motor and BMW Group arm BMW Motorrad will endure, but it is sure to  benefit biking buffs in India. The joint venture will roll out ‘Made in India’ motorbikes in the below-500 cc category. BMW Motorrad has in its fold illustrious brands such as BMW, MINI and Rolls-Royce. TVS Motor makes motorcycles in the sub-250 cc category.
Call Disruption
April is the cruellest month, wrote T.S. Eliot. Bharti Airtel chief SUNIL MITTAL will agree. The Supreme Court put the fate of Airtel’s 3G services in at least seven circles in doubt by restraining the telco from adding new 3G subscribers. Mittal also had to appear before a Delhi court that is looking into corruption in the 2G spectrum case.