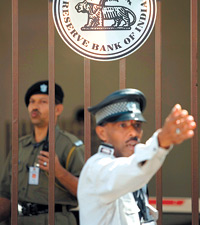 The Reserve Bank of India (RBI) has published figures of India's investments, inward and outward, as at the end of June 2009. It is remarkable how close the net investment position was then and two years earlier; at both points of time, India owed about $80 billion more to the world than it owned. In the first year it piled up considerable assets, and its net liabilities fell by $30 billion; in the second year, it collected liabilities faster than assets and ended up where it was two years ago. The unchanged net position does not mean that assets and liabilities have stagnated, rather that they have grown by roughly the same amount — about $100 billion each. Since assets were less than liabilities to begin with, they grew more rapidly than liabilities over the two years — by about 37 against 28 per cent.

Assets may be divided into those inadvertently acquired and those acquired with a purpose. Amongst the former are the foreign exchange reserves held by RBI — how prescient of its creators when they chose a name for it 75 years ago! Reserves constituted the bulk of India's assets two years ago, and remain predominant, having risen from $213 billion to $265 billion in two years. But deliberate private investments, started from a modest total, almost doubled from $50 billion to $95 billion. The bulk of the rise was in direct investment, which rose from $36 billion to $70 billion. As their capacities outran domestic demand, Indian companies looked abroad and set up or bought into companies abroad. Indian portfolio investment abroad remains negligible, because RBI permits it only under very restrictive conditions: Indians can only invest through mutual funds and not directly, and Indian fund managers cannot think of investments abroad that would appeal to Indian investors. Investing abroad would spread risks and may bring good returns; but both the authorities still look on it as a faintly unpatriotic activity.

So too was inward investment once regarded, but attitudes changed with the reforms; now, investment inflows from abroad are considered a sign of the world's confidence in India. However, that confidence does not extend to all investment. Portfolio investment was almost the same in June 2007 and 2009; foreign investors certainly did not consider buying Indian shares as the road to riches. They have come to prefer direct investment, which went up from $90 billion to $142 billion.

It is not, however, commonly realised that debt inflows into India are higher than equity inflows, and have risen at least as fast; against equity investment of $142 billion, "other investment", as RBI prefers to call debt, was $203 billion at the end of June. That is almost a third of total domestic bank credit. Indian corporates have come to depend heavily on borrowings from abroad, which they prefer for a number of reasons: foreign interest costs are lower, and foreign lenders less fussy and bureaucratic than Indian banks.

There was a time in the past when such borrowings in foreign currencies would have been considered risky, both by the corporates and by RBI, which would surely have acted to restrict them. But attitudes have become more relaxed. Foreign loans are risky only if there is a risk of rupee devaluation; and the huge reserves accumulated by RBI have eliminated that risk in the eyes of the borrowers. There are also ways of insuring against the risk by means of operations in forward markets. RBI is old-fashioned enough to look at these markets with suspicion; consider what a fuss it made about P-notes last year. But even RBI cannot deny corporates the facility of hedging against exchange risk in real transactions; so presumably they feel comfortable enough with such large exposures in foreign exchange. Perhaps they even think it is smart business to borrow in foreign exchange. In the second quarter of 2009, the quantity of foreign exchange in RBI's vaults remained almost unchanged. But its dollar reserves went up by $13 billion; the entire rise was in valuation. So RBI is speculating in foreign exchange markets, and at least in the latest quarter, it did quite well on its bets. Indian businessmen are no less clever, or at least would not admit they are.

According to balance of payments statistics, India has run a large and rising current account deficit, amounting to $37 billion in the past two years. A current account deficit must be matched by a rise in the country's net liabilities. As the figures it has given out show, RBI has not observed any such rise. Did it go wrong somewhere? No problem; it can attribute the discrepancy to valuation changes.