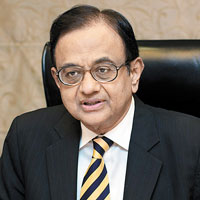 08 November, 2014
Print this article Font size -16+
Finance minister P Chidambaram’s infectious optimism while addressing an India investment roadshow in Hong Kong, is obviously borne out of the discussions he has with his Cabinet colleagues, and the prime minister. But despite the brave front put up by him, the world does not quite see the Indian economy the way the finance minister does, or the way the United Progressive Alliance sees it.
Within hours of the FM’s meeting with 200-odd investors at the Citi-hosted event, the International Monetary Fund lowered India’s 2013 GDP growth projection from 6 per cent to 5.9 per cent in its update on the World Economic Outlook.
The reasons are obvious. Except for a tantalising peek into a ‘dream’ Budget 2013 (‘there will be no tax shocks’), there is little that the FM said that is not already known: that the insurance and pension regulations will be placed before the Parliament in the Budget session (they better be, they have been delayed far too long); that the GST will not be possible in 2013, except that he can try passing the legislation by December; that the tax regime will be stable (Chidambaram said that right after he became the FM), etc.
The irony is that many of the legislative promises the FM made either hinge on substantial support from the opposition parties to pass through both the houses of Parliament or are dependent on the UPA coming back to power for the third time in a row. Neither of those is guaranteed. Meanwhile, Chidambaram’s cry that unstable coalitions are the biggest threat to future reforms implicitly exhorts the voters that if you wish to see more of this, vote us back to power — with a majority.
He is hoping that the general voter will see the big picture: if there are reforms, there will be growth, growth leads to prosperity and, perhaps, better standards of living. But before they tread to the polling stations, the voters will also keep in mind the back-breaking inflation, a string of corruption cases and sleepy governance for much of the first half of UPA II.
Meanwhile, the poor will evaluate the benefits of MGNREGA and direct cash subsidy, education-for-all, food-for-all and medicine-for-all. It will be a fight to the finish.