Too Big To Ignore 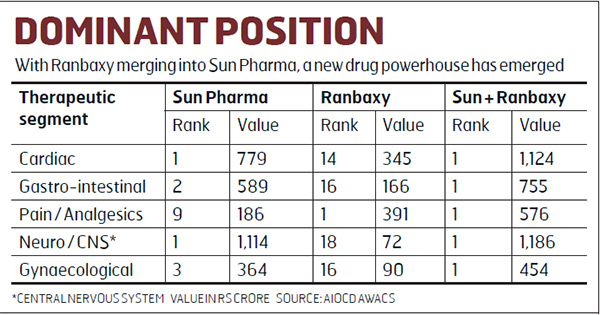 08 November, 2014
Print this article Font size -16+
The proposed Sun-Ranbaxy deal, where Mumbai-based pharmaceutical major Sun Pharma has agreed to pay $ 3.2 billion to acquire Ranbaxy Laboratories from its majority shareholder Daiichi Sankyo of Japan, is a fit case for scrutiny by the Competition Commission of India (CCI) for two reasons.

First of all, India’s competition law makes it mandatory for companies engaged in such activities to seek the CCI approval before the conclusion of the deal if the M&A activity results in the creation of combined assets worth Rs 1,500 crore or a sales turnover of Rs 4,500 crore and above. With a combined revenue estimate of over Rs 25,000 crore, Sun-Ranbaxy clearly is above the initial threshold.

Secondly, approval of the CCI is needed if products from the combined entity have a market share of over 15 per cent. Here again, industry estimates indicate that there are at least two dozen medicines where the market share of Sun-Ranbaxy is significantly higher than the threshold limit.

Thus, it is only natural that the CCI, whose key responsibilities include monitoring M&As to ensure that the combined entity does not cause appreciable adverse impact on competition, should scrutinise the Sun-Ranbaxy deal.

As a routine practice, the CCI has sought more information about the deal from both the companies. Now, it is the turn of the two companies to provide their response that will prove that the market dominance in certain products does not result in a monopolistic situation where the Sun-Ranbaxy combine can influence the prices of these medicines.

While the CCI is quite capable of looking into the merit of the application, and it is not appropriate to guess the commission’s final verdict, it is fairly certain that the Sun-Ranbaxy case will be influenced by the presence of the country’s medicine price watchdog — the National Pharmaceutical Pricing Authority (NPPA).

Unlike other products, medicine prices in India are under the watch of the NPPA. While it fixes the retail prices of a notified list of medicines, it wields the power to fix the price of any other medicine in the market, in need be. Of late, NPPA has been very active in utilising this public interest clause in the Drugs Price Control Order (DPCO) notified under the Essential Commodities Act to fix the prices of several categories of drugs that are technically out of price control.

What needs to be seen is how the pro-active role of the NPPA will influence CCI’s verdict on whether Sun-Ranbaxy deal can turn anti-competitive or not.