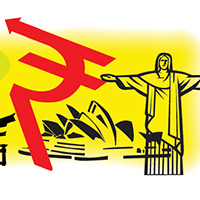 08 November, 2014
Print this article Font size -16+
Any tears are being shed across the country over the unbridled decline of the rupee. Plans for higher studies are being reconsidered; foreign trips, particularly those to the western hemisphere, are being rerouted to places closer home — South-east Asia. But then, since misery does love company, maybe one can take heart in the thought that the rupee has appreciated against several currencies in the past year. Take Australia, for instance, which is emerging as a destination of choice for Indians vis-a-vis higher education. The Australian dollar is still cheaper than it was a year ago. In fact, it’s 4.5 per cent cheaper. And, instead of that trip to Europe, which is now 16 per cent more expensive than last year, you could visit alternative exotic locations such as South Africa (which is as much as 10.6 per cent cheaper for Indians than last year) and Brazil (2 per cent cheaper). But if you’d like to stick to East Asia, try the Land of the Rising Sun, Japan, which is 13 per cent cheaper.
— Abraham C. Mathews
When The Name Isn’t Enough
This year 769 students did the unthinkable. They chose lesser known institutes over the much sought after Indian Institutes of Technology (IIT). That is reason for worry. Getting into the IITs has been a dream for hundreds of thousands of engineering students ever since the first IIT was established in 1952 at Kharagpur. So, has Brand IIT suffered an erosion? It’s all a question of supply and demand. Till 2007, there were seven IITs, now there are 16. Many in smaller towns like Mandi and Rupnagar do not have their own campus yet. Big firms are not even willing to attend placement sessions in these institutes. So while the number of seats has increased, graduates from these colleges don’t make it to the crème de la crème. Till the time these institutes generate their version of an
N.R. Narayana Murthy, the IIT name will need the location suffix to carry weight.
— Anup Jayaram

Despite the constraints, big RE developers and solar panel makers say the potential and market for the RE sector is huge, especially since resources like sunlight, wind and biomass are unlimited.

Similarly, even with government incentives being withdrawn in the wind sector, power generation through wind is
only increasing.
— Moyna
Now You Can Purify Your Water On The Go
The battle for a bigger share of the high-growth water purifiers business is heating up. With players such as Hindustan Unilever and the Tatas entering the space, market leader Eureka Forbes is upping the ante, and foraying into the personal purifiers space. Its CEO, direct sales, Marzin Shroff, says the firm will soon launch ‘Aquaguard on the Go’. “It’s a  cartridge-based bottle in which you can fill the dirtiest water in the world and drink safe water,” he says. Currently, it’s being piloted in Dubai. The price in India would be around Rs 600. Incidentally, the first in this space was Swiss firm Vestergaard, whose award winning on-the-go filtration product ‘Lifestraw Personal’ is used by backpackers globally. Till now mostly in the public health space,  Vestergaard is planning a retail venture. A Vestergaard spokesperson said the company is planning to launch two new products later this year in the Indian retail market — the LifeStraw Countertop and the LifeStraw Bottle (which has LifeStraw fitted inside).  Every drop counts.
—Chitra Narayanan
(This story was published in BW | Businessworld Issue Dated 12-08-2013)