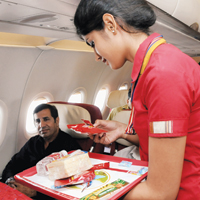 As the aviation sector scrambles to cut its $2-billion (Rs 9,600-crore) losses by resorting to cost cuts and re-negotiating deals, all related businesses — from catering services to in-flight equipment providers — are feeling the pinch as well. "Whosoever is able to provide us with the best service at the best price gets the contract," says an Air India official. For instance, he says, as there are 2-3 vendors for digital in-flight entertainment, the airline can easily secure the best bargain. "This, however, goes for all airlines. It is not a subjective situation but an objective one. All airlines at this point in time are negotiating and revising expenses incurred and services rendered," he says.

And the revisions are substantial. The airline used to spend about Rs 100 on a meal for an economy-class passenger and Rs 150-200 for a business-class passenger. Now with the changed scenario, the same meals are contracted for Rs 80-120. Worse, "the conversion of full-service flights to low-cost carriers has affected our business", says a senior manager at a leading airline catering service provider. A 15-20 per cent drop in catering orders has been seen in the past few months. Jet alone has decided to withdraw seven aircraft in order to convert them into low-cost carriers. Kingfisher, too, has reduced its price per meal by 20-25 per cent. This adds up to a loss of several crores for the catering major.

Meanwhile, Jet will continue to convert more of its full-service carriers to its low-cost Jet Konnect service, where food is sold on board, like at IndiGo and SpiceJet. Air India too is negotiating cost reductions in its in-flight services as it converts its full-service fleet to the low-cost Air India Express. For instance, "last year, we asked newspapers for bulk order rates — now, we do not pay more than 40 per cent of the cover price for the papers", adds the official at Air India.

There have not been many changes in terms of ground handling. But Jet has cut staff by 2,000 people and sources in Jet say another 2,000-odd (including attrition) would gradually be eased out (see ‘Reconfiguring Jet Airways'). Air India is not laying off as of now and Kingfisher could not be reached to comment on this issue.

Airhostess training institutes that were thriving in the boom have also been forced to revise their estimates. Airlines such as Jet and Kingfisher have stalled recruitments even though low-cost carriers continue to recruit freshers. "The dip in the aviation industry has definitely affected other related sectors," says Sapna Jain, director of Air Hostess Academy. "The growth of the aviation sector did not turn out to be the way we expected due to problems beyond our control." But Jain says the pay packages offered by airlines have not seen any changes at all.

"If this trend continues, we expect to lose anywhere between 35 and 40 per cent of our aviation catering business in the domestic market in the year 2009," says an official from a catering company. "That is a big figure. Only government intervention at this point in time can reverse the trend and ensure the continuity of full-service flights." But that's not likely to happen.