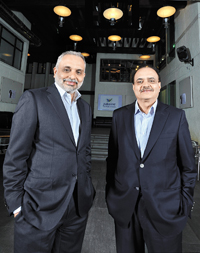 08 November, 2014
Print this article Font size -16+
McDonald’s and  several other food chains found out the hard way that what works in the US doesn’t work in India. That could explain why the Bhartia brothers, who run Jubilant FoodWorks, the master franchisee of the Domino’s Pizza brand in India, would rather wait and watch before getting a slice of the exciting marketing action that the pizza chain has initiated in the US.
In the US, Domino’s is undergoing a dramatic makeover that includes pepping up its pizzas, redesigning its store format and changing its logo. Said Richard Allison, executive vice-president, Domino’s Pizza International, who flew down to India last week to open the chain’s 500th store here: “We are leaving it open to the individual markets around the world whether they want to follow this new model or not.”
In the US, Domino’s, which is owned by Bain Capital, has begun reformatting its stores to create a ‘pizza theatre’ area where diners can view the pizza making process. It has also introduced a special upmarket product line called artisan pizza. “We are expanding the new store format now in the US,” says Allison.
The logo change, he says, would be an outward reflection of what’s happening inside the stores. To begin with, the new logo, which will drop the word pizza, will be seen on stores that are going to be reformatted. But the company is not insisting on its global partners to follow suit. “Our international markets have the option of just the word Domino’s or the words Domino’s Pizza. It depends on which model makes sense to them,” says Allison.
But Shyam Bhartia, chairman, Jubilant FoodWorks, is in no hurry. “We will look at the branding, take a call, and implement at our pace.”
According to Allison, India is Domino’s fourth largest country in terms of store counts, after the US, UK and Mexico. “But in terms of number of pizzas sold per store, India ranks No. 1. Eight of the chain’s 10  busiest stores worldwide are in India as well,” he said.
Recently, Domino’s global stores count crossed the number of stores in the US. “In the second quarter of this year, we had 4,901 stores in the US, and 5,023 stores outside of the US,” says Allison. He claims since early  2010 when Domino’s set in motion its makeover, it has seen dramatic success in the US, recording same-store positive salesfor three consecutive years.
In 2010, Domino’s completely reformulated its pizzas and announced the change through a risky marketing campaign (it put out a series of ads pointing out how its pizza crust tasted like cardboard).
In the US, the pizza maker — known as the 30-minute delivery chain — has also begun a drive to bring more customers to its stores. But again, it’s not driving this thrust globally. Shyam Bhartia says that in India too “we are driving delivery as well as dine in. All our stores now have a seating area”.
He says the company has invested in mobile apps, which has improved online delivery volumes. Now 13 per cent of the delivery is online, of which 5-6 per cent comes from the mobile route.
That’s pizza ordering really on the go.