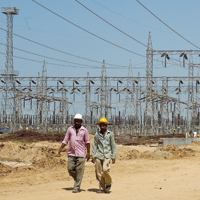 The tussle between merchant power producers on the one side, and the Central Electricity Regulatory Commission (CERC) and the Ministry of Power on the other, over capping the price that the producers can charge, is reaching an endgame. CERC, which is holding a public hearing next week on the issue, has proposed to fix the minimum tariff at Re 0.10 per kwh and the maximum at Rs 11 per kwh.

The regulator, CERC, believes that the short-term power market structure is still imperfect with a supply deficit and virtually nil competition. During high-consumption months — June and July in north India, for example — distribution firms buy power at any cost to maintain supply. This inflates the retail tariff payable by the consumers and such abnormally high prices — sometimes as high as Rs 15 per unit for peak power — can be charged by merchant power producers. The power ministry believes there should be a cap on this price. The ministry, however, had to backtrack due to strong opposition from investors of merchant power plants, who say that they are taking immense risks because they are operating without guaranteed power purchase agreements. Now, CERC — empowered to regulate price under the Electricity Act, 2003 — has stepped in with its views.

Most experts argue against any cap on competitive power as it runs against the spirit of free markets. Globally, power exchanges have price caps, set fairly high but to act more as a safety valve and not to stifle normal market swings. For example, on the Australian NEM (National Electricity Market), which covers the bulk of the country's power trading, the price cap is set at an equivalent of Rs 350 per kw. Kameswara Rao, leader of energy, utilities and mining practice at PricewaterhouseCoopers, suggests mandating utilities to build excess capacity or spinning reserve for use in such exigencies is one way out of the high prices commanded during peak power demand. This is hardly practical in India, which is running persistent energy deficits of about 15 per cent over several years now. The only practical option seems to be to entice investments in new plants. As new capacity comes on stream, the merchant and trading rates will quickly drop to the cost of production.

The debate is beyond that, says Prabjot Bhullar, partner, Khaitan and Co. While CERC can regulate the tariff, the present move raises several legal and regulatory issues such as ‘conflict' with the ministry's stand on selective merchant power cap rather than a complete cap, a state subsidy to consumers, grounds for intervention due to ‘imperfection in markets', and a distinction in merchant sales between states and other producers. In 2007-08, the maximum power sold in the short-term was by the states, which qualify neither as generating companies nor as licensees, a status that CERC has acknowledged as a regulatory impediment.

A power-hungry nation, India's peak power deficit is growing at 12.6 per cent per annum, duly reflected by prices on exchanges. Merchant power — the surplus power without any long-term purchase agreements — carries higher risks in terms of recovery. The persistent enthusiasm to cap rates on sales from such units is inviting the investors' wrath. "Ultimately, the consumer will shoulder the additional burden as every producer has to meet his internal rate of returns," says Rupen Patel, managing director of Patel Engineering, which is setting up a 1,300-MW plant in Tamil Nadu.