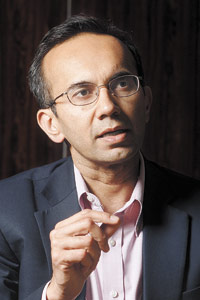 India looks like a Boeing 747 slowing to a stall.. What does one do to prevent this?
It is a good analogy. I am working mostly with entrepreneurs, largely in the private sector and civil society. In that space, I don't see any diminution of interest in taking risk on the part of the youth. If anything, the willingness to take risks is rising. I would say there are very few things that are working, please don't kill those. Decentralised private sector initiatives by young people are alive and well, at least in the top ten cities. I don't think you do that unless there is an underlying sense that there will be a self-correction. It is very unlikely for somebody to leave a secure job to start a non-profit, go to the Dharavi slum or start a new company in clean-tech, if he thinks that the sky is falling.

What would your advice to the new government be?
I don't have anything competent to say about macro-economic stability and all that. But, on the micro front, the thing that I would most like to see energised is something the last government tried putting in place: an infrastructure for skill development. They created a very good entity in Delhi called the National Skill Development Corporation (NSDC). The usual impulse would have been to create a big bureaucracy. (Instead) they got a private sector fellow with civil society and government links to run it, more as a funding and a catalyst agency to disseminate small amount of money for skill development. That's the kind of thing, historically, India has not done very well. In biotech, there is a fund that has been languishing forever.

The number of people who have been trained, so far, is very small...
That's fine. The whole ecosystem of skill development has to be invested in. It's not like a fellow setting shop and saying I am going to train a hundred people today. That would not be a very clever way to do it. You won't get any leverage from that. I agree that it would take a good decade for meaningful numbers to pop up. As is usual in India, you never know what the new government is going to do. This has been around for two years. One can easily imagine some babu shutting it down.

The situation is pretty alarming. There is this huge youth bulge coming and the industry has no jobs for them.
That's right. That's why 100 per cent of the emphasis should be on job creation. The macro trends are clear: if you don't generate enormous number of jobs, you are sunk. This Boeing that you described will go into free-fall.

Apart from skill training, what other things, initially, can be done to prevent the plane from crashing?
Several ideas come to mind for implementing in the 18-month time horizon. Other than reinvesting and quintupling skill training programme, electronically facilitated disbursement of public services needs to be expanded. A lot of this is about psychology. People start to feel completely alienated. The new administrator -  in this case Mr Modi -  will have a little bit of honeymoon period. People will wait and watch. The thing that most irritates the middle class, lower middle class or the most deprived person on the street is corruption, inability to access basic services that are, in fact, in many cases, enshrined in the constitution. There Nandan Nilekani and company's effort is most visible of the lot. There are also smaller efforts on using technology to cut down on corruption, to catch crime, to shame people, to punish people. A technocratic administration or at least an administration that is predisposed to be technocratic can make good progress in 18-24 months. That would reduce the likelihood of alienation setting in even further.

In other words some version of Nilekani and Aaam Admi Party together?
No, no, not Aam Aadmi Party. Aam Aadmi Party has no technology to it. Actually, Aam Aadmi Party is a symptom, symptom of alienation, which is great. I think Kejriwal has done a nice job of tapping into that sentiment. I don't think he did anything constructive about it, other than sitting on the road. It is not just Nilekani. He is most visible. If you go to Bangalore, Hyderabad, Chennai, particularly in the south, you see a lot of efforts by the civil society on organising things, getting public officials to focus on the right things. That's the second thing I would do.

And the third?
My focus is what is actionable. In some of the major cities, we should relook at or revitalise whatever version of urban planning board that exists, because this is where the nexus of pain is. People migrating into big cities and finding nothing. This is where expectations collide with reality, and that collision is dangerous. We have almost no planning in any city. Even constituting small, five-member powerful urban committees to pick five things per city to fix (can be helpful). Whether it is about parking, cleaning up the park, or relooking at some harbour front type of stuff.
break-page-break
Technocrats in cities, architects and so on, have been thinking about these for decades and plans are all sitting around. The problem is to see that the authority is not tied up with some bureaucrat who is milking it for money. This is where a business-friendly administration will tap into industry captains and bring them into a committee. Two business people,  two government people, a civil society person. An urban planning authority will be the third big thing I would do.

What else would you suggest?
The last thing I'll do is - not in the short run, but it is close to my heart - create a good university. Making a commitment to revamping our really decrepit educational infrastructure - where government officials decide what to teach, where to teach, how to teach. Allowing some ideological diversities to come into the class room. We have no good university. Again, private sector keeps busy doing its own thing and getting hamstrung by the government apparatus.

What could help India expand its exports in the next five years? Infrastructure...
In the short run, I don't know. The constraint I am putting on my comment is that I have to believe that it is doable. I don't believe that meaningful infrastructure alleviation is doable in five years. Actually, one could make a big difference by catching some corrupt people in the power sector and locking them up.

Corrupt in what way?
Maybe, corrupt is the wrong word. Getting rid of the incompetent in the energy sector is the way I'd put it. There is so little modern management practice in the power sector. Government interference in state-owned electricity boards; populism - local politicians promise cheap power, local guys steal power but nobody goes after them for fear of losing vote - get in the way. Of course, aggregate investment in power has to go up but the existing capital stock can be used more efficiently. Therefore, definitely, it is something that can be delivered in two years.

Good companies are investing overseas. A lot of companies are going global, out of India to US, Europe, Africa, West Asia.  That is good, that will benefit India in the longer run.

Only when they repatriate profits to India...
Yes. Also, anytime there is an acquisition, a lot of Englishman, Americans come into the country and expose people in Madurai to Manchester. It is a very interesting, discomforting experiment in the short term but, in the long run, very positive. Everybody benefits. It has nothing to do with repatriating cash.

So, it helps in technological upgrading?
Yes. It is learning to engage with the world which will drive export. You know how to sell, how to engage with others. I agree with you on the capital side. It will take a while for capital to come back.

What should India do to address the criticism it is facing on IPR (intellectual property rights) violation?
I don't have a good solution for that. The government has to provide a range of medications available to the poor, and that creates conflict with people who own the intellectual property. The right solution would be some sort of tiered pricing on the part of global pharma, working in concert with poor country governments, making sure that in implementation, there is as little corruption as possible. Unfortunately, it (IPR issue) has become confrontational.

What will be your advice to the new government on FDI in multi-brand retail?
Clearly, the government should allow foreign investments. We need so much investment in retail infrastructure. It is an enormous job creator. In the short run, perhaps, the mom and pop stores may get eliminated. We don't even know if that is true. In Germany, in past 30-40 years, small stores have not all vanished. They have thrived alongside big retail. What will happen is that inefficient mom-and-pop stores will vanish. Frankly, that is a great thing. They are imposing a cost on everybody, including poor people. Nobody has a right to say that I have to stay in business even if I am doing a terrible job. Unfortunately, the BJP's support is coming from that trader community. So in the short run they are being opportunistic. I am hoping that when they are in power they take a look at it. The evidence across most countries is that big investment is a net multiplier in a variety of sector. I am glad you raised that because it is one thing the government can act on pretty quickly.