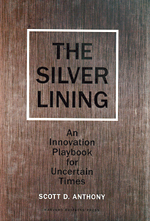 The book is full of such insightful examples, and the author brings out his rich and diverse experience to lay down a roadmap for companies to follow. To start with, companies need to prioritise innovation initiatives. Standard tools of measurement such as first year revenues are not sufficient. Had Google been measured on these counts, it would have been written off as a failure. Factors such as upside potential and unique contribution to portfolio balance serve better. The book also lends a personal dimension by asking leaders to learn to manage paradoxical situations. Towards the end, the author lists ten disruptive ideas of the future, including Facebook and Alibaba.com. These are indeed the silver lining.