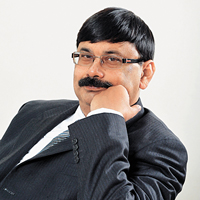 08 November, 2014
Print this article Font size -16+
The past year has not been particularly good for the Indian banking sector. Credit offtake — both at the business level as well as by consumers — has been less than enthusiastic. Non-performing loans have increased — and some of the loan defaulters are not shady firms with a dodgy past but companies belonging to blue-blooded promoters. Meanwhile, the number of borrowers who have applied for their loans to be restructured has also risen. These are not technically non-performing loans, but they are asking their bankers to take significant haircuts to stop the loans from turning bad.
And things don’t look too good in the short run either. Most economists are not very optimistic about growth improving sharply in the near future. The central bank, which started raising rates from October 2011, has steadfastly refused to reduce them even by a token 25 basis points, despite suggestions by the finance ministry. Reserve Bank of India governor D. Subbarao has said several times that his primary focus is to control inflation — and unless that comes down, it will be difficult for him to justify reducing the rates. But the flip side is that unless rates come down, many bankers do not expect the economy to pick up, or the credit offtake to improve. Continued high rates also put pressure on the weaker borrowers, thus raising chances of default. And as many economists point out, even if the central bank reduces rates in its next policy review, there will be a lag effect before it does anything to the economy.
Many banks also need to worry about meeting the new capital adequacy and risk-testing norms of Basel III, which come into effect from 1 January 2013.
Despite the gloomy external conditions, the top Indian banks continue to thrive and flourish. Quite a few of them have exceeded the expectations of banking sector analysts. And all of them have shown healthy growth even while other banks have struggled.
Without giving the results away, all I will say is that the majority of our winners has shown consistency of performance over the past five years. Several of this year’s winners are repeating their feat of last year. Others have consistently remained among the top five in their category for at least three years now.