There Ain’t A Trickle-Down 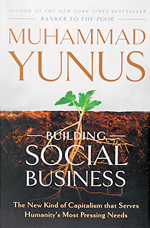 Muhammad Yunus needs no introduction. Winner of Nobel peace prize in 2006 and author of classics such as Banker To The Poor and Creating A World Without Poverty, Yunus is widely known for his successful microfinance initiative, Grameen Bank, in Bangladesh. So when the stalwart speaks, you listen.

Grameen Bank's success prompted Yunus to work on areas such as healthcare, drinking water, medicine, telecom and energy. And some of these initiatives have been modelled as social businesses. For Yunus, social business is about applying a business model to solve a social issue, without a profit motive. The author says we cannot expect free market to address social problems. All the talk about the trickle-down effect reducing poverty is also unreliable. Applying a business model to solve a social problem would work better. Expecting a for-profit company to pursue both social and profit goals also does not work; CEOs will unconsciously lean in favour of profits.

Grameen Bank associated with French food giant Danone to set up a ‘social' business in Bangladesh. The unit produces Shokti Doi yogurt, which was fortified with nutrients children in Bangladesh need badly. The challenges in setting and scaling up this business make for fascinating reading. The scale of the factory, the correct price point, employing local women as salespersons are some of the key decisions covered, and their impact analysed in detail. A chapter on launching a social business has useful advice such as identifying a cause one has passion for, defining goals and testing the model before launching. Yunus says one does not need to know how to do business; rather more important is the desire to solve a social problem.

Yunus's approach is balanced and practical. There is no sermonising or the usual ‘we are from the not-for-profit sector and do gooders so we know best' approach. He talks about questions such as whether partners like Danone are actually enhancing their image using Grameen Bank, etc. Yunus says such queries are irrelevant; he is willing to "be used" as long the causes are met. On salaries, again, he is categorical: to be the best, you have to attract the best. And, hence, pay the best.

Social businesses and Yunus have had their share of doubters. Some say the tiny loans offered by Grameen Bank are not useful in the long term and emphasising credit could not eradicate poverty at all, and so on. All said and done, one cannot but marvel at Yunus's intense attempts to champion the cause of eradicating poverty. His is a case of a noted economist making a journey into the real world to face real problems and happily using his personal brand to strike tie-ups with leading multinationals to solve these problems. He needs to be read, understood; and he needs to be judged not only on his results, but on the sheer weight of his efforts. In India, good writing on the social sector is woefully inadequate. While high profile outfits such as the Bill & Melinda Gates Foundation have helped raise visibility in the sector, there is still little understanding of social business. This is an excellent read in that space.