The iPad Gets Better 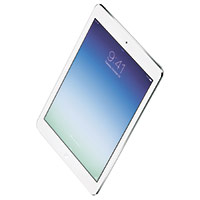 08 November, 2014
Print this article Font size -16+
How does one look with an evaluative eye and a level head at a product that started a revolution? Apple’s iPad certainly changed aspects of my life in countless ways as I’m sure it did others’. Reading, news, and art are only some of the wonderful things that took up large welcome spaces in my everyday routine, purely thanks to the iPad.
So today, when I look at the fifth avatar of this amazing creation from Apple, I feel almost guilty even at the fleeting thought that the iPad Air isn’t quite the dramatic difference we saw between a MacBook or any other notebook, and the MacBook Air, that sliver-thin work of art that seems impossibly light even years after it’s been around and been compared with ultrabooks that sprouted up in imitation. The iPad Air isn’t a breathtaking difference from its earlier versions. But I’d have to agree with the majority of reviewers when they say it’s the best tablet around. That, it is.
I’ve been through all generations of the bigger non-Mini iPad, skipping the 4th gen. I use my iPad 3 to the hilt. I can certainly say that between the iPad and the Samsung Note 2 and 3, I’ve tortured my left hand more than it deserves with one device being too heavy and one being too wide to be held for long hours. So holding the Air feels so much better that I envy those who get their first iPads now.
As ever, it’s that seemingly flawless design that only Apple knows how to come up with. The tablet is now narrower and thinner, and the bezels on the sides are down to half their width, giving more screen space to the user. The screen is very nice and somehow lets iOS 7, Apple’s newest operating system for mobile devices, sit comfortably and look as if it fits just right. I wasn’t overjoyed with the change in style from iOS6 to iOS7, but It’s beginning to grow on me on the iPad Air. The design has been tweaked in keeping with the popular iPad Mini of which the new Air looks a larger version.
The iPad Air, like its predecessors, is premium and feels it. When you lean back with this device, you never doubt for a moment that you’re holding something of solid value. No hint of plastic here.
The iPad Air can’t really be thought of separately from its software and the fact of the massive ecosystem of apps that have practically sparked off the app industry. If you’re wondering Android or Apple, that’s one of the things you should consider. Android tablets get along better with other devices, but on the other hand, there are hundreds of devices  and accessories created just for the iPad or iPhone. Android tablets still don’t have a big selection of tablet-specific apps, but yes, they are so customisable. And then there’s Windows, slowly growing in popularity. Also, they seem more work-friendly as many Windows applications aren’t on iOS. With the iPad Air, Pages, Numbers and Keynote, equivalents of Microsoft Office, are now free.
As expected, the new iPad works very fast and is great for gaming, movies and heavy visual rendering. Interestingly, the older generation iPads still work well for most people. So, if you’re getting a great deal on an iPad 3 or 4, you’re not disadvantaged though if you have repetitive stress injury, a lighter device is so much better. You may also want to consider the iPad Mini.
If budget is not a constraint and you are going in for your first iPad, the iPad Air is the device to go for.