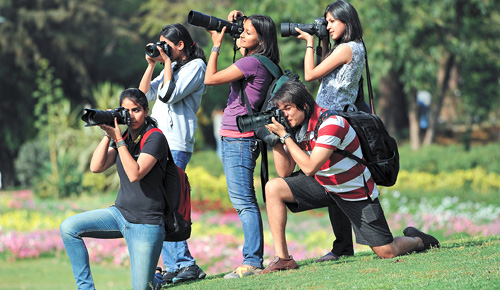 But what has broughi about this change? For starters, market leaders Nikon and Canon have realised the huge growth potential in the Indian camera space and are no longer neglecting this small yet mushrooming market. Instead, they are flooding the market with entry-level DSLRs to increase penetration. For instance, earlier this week, Nikon re-launched its D3000 model in response to the high demand of the product. It is Nikon's cheapest (Rs 25,450) and one of the highest selling models that comes with an autofocus (AF-S) 18-15 mm lens.

Secondly, technological advances, lower tax rates and innovative marketing strategies have brought down prices drastically. Last but not the least, there is now a soaring demand for high-end cameras, which has been triggered by the changing aspirations of the average Indian.

Take for instance, Mumbai-based Sheriar Irani, a financial advisor by profession and an amateur photographer by passion. Irani owns a Nikon D80 and is planning to upgrade to Nikon's latest mid-range product the D7000, a camera that will cost him about Rs 90,000. "With a digital camera you do not need any assistance," says Irani. He has learnt to use a DSLR camera by educating himself through online photography portals such as www.dpreview.com, www.nikonians.org and www.fredmiranda.com. In fact, he has gone a step further and bought a professional lighting system to focus more on micro photography, like clicking detailed shots of flowers, or his wife's saree and jewellery collection.

A DSLR camera not just gives superior picture quality over a compact camera, but also allows a user to choose from a variety of interchangeable lenses. DSLRs usually offer faster and more responsive performance, with almost no shutter lag (a delay between clicking the shot and when the photograph is actually recorded), and a faster autofocus system. It has better sensors that provide rich and better quality pictures. It also allows clicking higher number of frames per second. So you get to capture a moment before it is far gone.

Amateurish? Not Quite
It is hard to pin-point a single reason for the burst of interest in DSLRs, but a set of trends may provide some indication. First, rising incomes allow many people to indulge themselves in hobbies such as photography that till a few years ago used to be relatively expensive, but not anymore. Second, most mobile phones have made photography accessible to everyone; with email and social networking sites, they can exhibit their work to myriad audiences. Third, technological advances and computerisation of the photoprocessing have made photography much easier — and cheaper. In other words, affordability, wider access and greater user-friendliness have transformed the economics and market for customers, manufacturers and distributors.

"A lot of amateurs are switching to DSLRs and these cameras are not restricted to professionals," says Nikon India's managing director Hiroshi Takashina. "This happened in the US, Kenya and Japan about 5-10 years ago and is happening in India since last year. So, we expect the DSLR segment to grow at a higher percentage than compact."

Take the case of Rajiv Kumar, for instance. Kumar, who owns a jewellery business in Delhi, recently shifted loyalty from Sony's point and shoot camera to Canon's 550 D. "I have always had a passion for photography, but little knowledge initially. Watching my friends take pictures from a professional camera motivated me to pursue my passion at this age," says Kumar, who looks well above 50.

Another case in point is that of Vanshika Bhatia, a post-graduate student of Hisar University, who invested about Rs 60,000 to get a 550 D Canon camera. Her dream is to be a fashion photographer.

More than 90 per cent of the DSLR market is dominated by market leader Nikon — which entered the Indian market in 2007 and made it to the top within a short span of time — and Canon (at number two). The rest is accounted for by smaller peers such as Kodak, Samsung and Sony; who are trying their best to improve their market share.

Sony, the market leader in the point-and-shoot camera space, has recently introduced a range of semi-professional and professional cameras such as alpha NEX 3 and 5 series and DSLRs 55 (SLT-A55V) and 33 (SLT-A33). The company is aiming to create the smallest and lightest changeable lens camera and wants to strengthen its DSLR market share by riding on the launch of the alpha NEX series.

Tadato Kimura, general manager of marketing at Sony India, says the company plans to sell about 40,000 units of this new series by fiscal 2011.

The coming months will see many new digital cameras hitting the shelves. Fujifilm, which quit the DSLR market in 2009 to concentrate more on the compact camera space, launched a new set of semi-professional and digital compact cameras in India. A. Rajkumar, country general manager at Fujifilm India, says it is part of the company's strategy to first create brand awareness through compact cameras and then gradually re-enter the DSLR market.

Canon, too, is expected to come out with its new set of digital cameras for 2011 next week. "One thing that we are doing is positioning the entry-level DSLR as the most aspirational consumer product. That way, we differentiate it from the others," says Alok Bharadwaj, senior vice-president of Canon India. The company, which invests up to 10 per cent of its revenue in marketing, is planning to set up 300 stores over the next three years with at least 75 stores in 2011.

Currently, both Canon and Nikon are making efforts to grow the DSLR market as a whole rather than fight for a bigger slice of the pie. From opening photography schools to organising photo tours under the guidance of professional photographers — the companies are leaving no stone unturned.

After all, DSLRs are not only a good margin business, but are also a great source of additional revenues. Once a customer invests in a DSLR, he continues to upgrade it with latest lenses, additional equipment and accessories on a sustained basis.


Besides companies, that's also good news for authorised dealers such as Rahul Dass, owner of Dass Studio in Delhi's Connaught Place. Dass has witnessed a huge spike in demand for DSLRs in the past year. On an average, he sells three or four DSLRs a day, with an average price of Rs 30,000 to Rs 35,000.

Killer Apps
Latest trends in technology, improved features and functionalities are also driving the consumption story of such products in our economy. According to Bharadwaj, digital cameras are among the top five electronic categories that are witnessing rapid growth today. His list of five includes smartphones, iPods or laptops, tablets, flat panel televisions and DSLRs.

"These categories worldwide have shown huge growth because what has fundamentally reconfigured in these is the digitisation.

The technology, I think, is the single most important factor responsible for creating solid transformation in the way people have begun to look at these categories," Bharadwaj says. In the case of the DSLR, integration of features like video recording has also increased sales. Introduction of high definition or advanced video recording in most of the DSLRs has helped consumers stick to one product rather than spending money on a still camera and a camcorder separately.

Companies such as Canon have new functionalities such as high-definition videos, live view option, etc. high on their agenda. Further, prices of components like processors, panels, display screens and sensors continue to fall with technological progress, bringing down the price of the entire product and making the DSLRs more affordable.

The impact of the above has not been limited to just bringing down price points. With less price, you could buy more. Just to give an example, in 2007, an entry-level DSLR camera of 10.2 megapixels would have set you back by Rs 41,000. Thanks to the fact that technology is changing at a rapid pace, today's entry-level DSLR comes at a price that is almost 40 per cent cheaper — at Rs 25,000 — and that too with a 14.2-megapixel resolution. Not just that, the same camera comes with a technological edge in terms of better sensors, live view facility and advanced video recording to boot.

Companies have also started bundling the DSLR camera body with a kit lens in order to attract consumers who are looking for something that can function straight out of the box. Although Nikon's entry-level DSLRs always came with a kit lens, Canon introduced these kits only in 2008 when it launched its basic model, 550 D.

The prices of lenses for DSLR cameras have also dropped recently. Nikon has reduced lens prices by about 20 per cent since September 2010. However, Canon believes that the import duty is still high, and the prices of these lenses have not seen much downside.

Taxation: A Wet Blanket
An important factor responsible for the decline of the grey market is the fall in import duties. According to Bharadwaj, the influx of DSLRs in India happened in 2005 when the basic import duty was gradually reduced to zero from 20 per cent levels in a span of three years. However, what is still a major concern for most DSLR vendors is local taxation such as the value added tax (VAT). Needless to say, they are all eagerly waiting for the goods and services tax (GST) to roll out.

"VAT has not come down and the worst is that it varies from state to state which does not allow Indian markets to be a homogeneous integrated market," says Bharadwaj.

Takashina believes that taxes in India are comparatively higher than some of the other countries and that importing a camera increases its cost by about 17 per cent. "India is not just a quality-conscious market, but a very price-sensitive place and so taxes make pricing a huge challenge for us," he says.

In spite of the challenges, the DSLR market is set to grow further with camera manufacturers continuously experimenting with ideas amid fierce competition to get a bigger slice of the market. So, what's next? A slimmer, colourful DSLR with a touch screen display? Nikon's Takashina smiles broadly, but doesn't rule out the possibility.