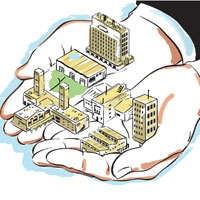 08 November, 2014
Print this article Font size -16+
Homes in India are now getting younger owners. What was earlier tagged as a luxury for the middle-aged, the demographics of the real estate buyer has been changing in favour of the youth. “The average age of buyers has now dropped to 27, and about 40 per cent of our buyers are in this category,” says Nikhil Jain, CEO of real estate company Ramprastha Group.

This is a significant drop from the average age of 41 years a decade ago, says Vineet Singh, executive vice-president and business head of the realty website 99acres.com.
Today’s 20-30 year-olds have better access to financial resources such as home loans and mortgages, with banks falling over each other trying to sell loans with various incentives. “More and more young people in the 22-30 age group are investing in residential properties via home loans,” says Santhosh Kumar, CEO, operations, at Jones Lang LaSalle India. Industry experts say that youngsters have become more independent in their outlook, and with enough savings they can afford to buy their own house. There is a growing trend of women homeowners in the same age group as well.
“We attribute this to the availability of more realistic saving instruments, a reorientation towards the nuclear family format, an increased orientation towards future stability and higher aspiration levels. It is clear that Indian youth today has become financially savvier,” says Kumar. The nuclear family format has resulted in lesser expense and more income in the current Indian households.
There is also an increase in double-income households, with both husband and wife working — also known as the DINK (Double Income No Kids) group. These people have been earning for five to seven years, and their corporate jobs allow them easy access to long-tenure home loans, thus reducing their EMI payout.
The main reasons for this trend could be that not only have Indians begun earning at a younger age, they are also earning a lot more money at a younger age. “If you open the bank loan books today, you will notice that the average home loan size falls in the category of Rs 18-20 lakh,” says 99acres’ Singh. “These youngsters who are investing in real estate prefer taking small loans and buying small houses for themselves. This has been the trend observed in metros and tier-1 cities across the country,” he says.
“About 80 per cent of this market chooses to go in for apartments. There is a latent demand for apartments in the Rs 25-75 lakh price range among these younger buyers,” says Singh. Young couples prefer investing in condominiums, rather than independent housing due to factors such as pricing and ease of living. Ramprastha’s Jain says that “people, in general, are moving away from individual homes. The four-tier security system set up in most condominiums today provides an assurance to the buyer. Also, condominiums ensure basic services like power backup to the resident.”
Besides the real estate buyers who actually use the property they’ve bought, there seems to be an influx of young investors in the Indian market as well. Says Brijesh Bhanote, director of sales and marketing at the real estate firm The 3C Company: “Ninety-five per cent of the market of young buyers has been buying for end use. However, over the past 18 months we have noticed a trend of young investors entering the market. These youngsters have picked up on the bullishness of the realty market and chosen to invest for more profits.” Singh expects this trend to remain stable for a while.
(This story was published in Businessworld Issue Dated 04-02-2013)
Tags assigned to this article:
magazine business news 4 infrastructure ankita ramgopal magazine 4 february 2013 vineet singh dink