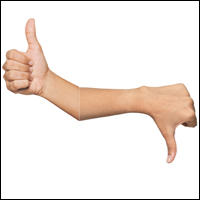 The list of disappearing products can be a very long one: floppy drives, rotary dial phones, carbon paper, photographic film (including Polaroids and associated cameras), even the humble telegram (this last is really not a product as much as it is a service; Western Union in the US has now become a remitter of money using the same distribution).

But Harish Bijoor of the Mumbai-based firm, Harish Bijoor Consultants, does not believe that categories die. "They may die in one market, but take birth in another," he says. The new markets may be smaller, and perhaps less visible.

Categories may also disappear because of market polarisation — products at the high end cater to those consumers in each of absolute quality and others gravitate to the lowest end to meet the demands of consumers looking for absolute value. The middle gets squeezed.

Product Homicide
Sometimes, manufacturers drive the end of the product life cycle, replacing a particular product with a better version. Take Maruti Suzuki, the company that revolutionised India's small car market in 1984 with the Maruti 800. With the exponential growth of this market, Tata Motors, Hyundai, Ford and General Motors launched models that competed with Maruti 800 and its sister products such as Alto, Zen, Swift and A-Star. Maruti will phase out the model by 2015.

"The important lessons for manufacturers are to set up internal processes for continuous innovation that challenge norms and think out of the box. If you don't innovate, someone else will make you irrelevant," says BCG's Mall.

Future Group's Chawla agrees. "Companies need to work at higher level on category management of which brand management would be a subset," he says. "The big challenge of marketing is to stay relevant." And some have learnt that — such as FM radio companies. It was a category that nearly died a few years ago, but revived after bringing in content and programming that was relevant to young audiences, and is in sync with the times.

The next time you go to the store, take a good look around at the products on the shelves. A year or so from now, they may not be around.