The Upside To The Slide 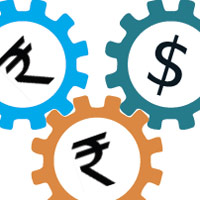 08 November, 2014
Print this article Font size -16+
While India frets over the depreciation of the rupee against the dollar, theoretically, Indian exporters should be cashing in on the phenomenon. Each dollar-denominated export consignment should ideally fetch them more rupees now. Multinationals should find Indian products and services cheaper and, thus, increase their engagements with India. There should be more foreign interest in acquisitions and investments. But none of this is happening. Instead, Indian exporters — apart from the service industry and sectors like handicrafts — are heavily dependent on raw material imports.

The higher the imports, the lower the overall gain. The confusing signals given by the Centre — which should ideally boost investor confidence in India — to the global investor community are nullifying the positive effects of rupee devaluation. The focus should be on local production across sectors, such as electronic hardware, to avoid overdependence on high-cost imports. If we can’t help arrest the downslide of rupee, let’s at least make the most of it.
— Joe C. Mathew
A Deluge Of Frauds?
Insurers are notorious for not accepting claims and keeping you waiting. But when a natural calamity strikes, such as the floods in Uttarakhand, they go the extra mile to soften the blow. Life Insurance Corporation of India said it will set up a special cell to fast-track claims from flood victims, and may even relax death certificate norms.
Commendable, but questions arise. Should one form of death take precedence over others?
Shouldn’t all settlements  be fast-tracked, whatever the cause of death? Also, there are other dangers here. When you accept anybody missing in a disaster for 30 days (as opposed to seven years) as dead, doesn’t that run the risk of fraud? Especially since fraud investigators warn that disasters result in huge manipulations, with scamsters producing false death certificates to push their claims.
— Abraham C. Mathews
Fixing The Fixers: Here’s How
It’s said, if you can’t beat them, join them — and the Centre would do well to take note. Given the number of match-fixing scams exposed in the recent past, the question the Centre is facing is: Should the Public Gambling Act, 1867, be amended and gambling — including sports betting — legalised? This was raised at a recent conference by the Federation of Indian Chambers of Commerce and Industry, which pegged the betting business — marked by untaxed, unlicensed cash flow — at Rs 300,000 crore annually in India. Global experts claim legalising sports betting could bring in accountability and curb match-fixing by making it easier to track cash transactions and bank accounts. Besides, with state regulation, sports betting could bring in additional revenues of Rs 12,000-19,000 crore. Within India, betting is legal in Sikkim and Goa, which has had positive dividends. Maybe it’s time for the Centre to play its hand.
— Ankita Ramgopal

The Brown Man’s Burden
The UK government has deemed that residents of the former ‘jewel in the crown’ are high risk as far as granting a
visa is concerned. The british government intends to introduce a £3,000 visa bond starting november in a move to restrict inbound immigration — a threat that most developed nations are trying to conquer. The measure is targeted at visa applicants from six high-risk countries — India, Pakistan, Nigeria, Bangladesh, Ghana and Sri Lanka — but has not defined who would need to furnish the bond. On the other hand, it’s not that India is very friendly in issuing tourist visas either. Tourists from just 11 countries get visa on arrival, that too only at the four metros. This may change over time, but what’s galling is the tag of a high-risk nation.
— Anup Jayaram

Once Upon An Advertisement...
From traditional ad spots, to strategic product placement in movies, to now your child’s bedtime stories, ad agencies are breaking into new creative spaces. So, if you’re a Ruskin Bond fan and you happen to read his new online story, don’t be surprised if the characters keep munching on Parle G biscuits. Parle Products has tied up with the renowned Indian author to write stories for their microblog, The Future Genius. Under the agreement, Bond will write kids’ stories twice a week on Parle’s site. While the practice has become ubiquitous in the Indian film industry, advertisers are now experimenting with indirect advertising in areas like sculpture and paintings using branded content.
— Sachin Dave

Old’s Gold, But Where’s The New?
There’s a stream of revamps in the passenger car market. Tata Motors launched five new variants in June (Indigo eCS, Sumo Gold, Nano, Indica and Storme), Maruti relaunched the Alto800, Nissan is coming out with two Micra variants, among others. But while all the others have steadily launched new models every other year as well, the last ‘new’ car from Tata Motors’s kitty was the Nano in 2009, which is selling way below expectations. While upgrades are all fine on their own, the fact remains that merely upgrading old models won’t do much for the firm’s flagging fortunes in a slow market. In May, the sales of its passenger cars dropped by 23.27 per cent to just 11,134 units, of which the Nano, Indica and Indigo accounted for 8,927 units. In a market where sports and multi-utility vehicles continue to be the customer’s favourite, perhaps Tata Motors will be better off focusing on ‘new’ products in the Rs 7-10 lakh multi-purpose vehicle segment, which is the only one still showing some growth.
— Swati Garg

A Case Of Blurred Boundaries For Sebi
The Securities and Exchange Board of India’s (Sebi) best-laid plan to widen the reach of mutual funds (MF) by providing additional incentives to asset management companies (AMC) has not yielded the desired result.
The market regulator, in August, had allowed fund houses to charge an extra 30 basis points (0.3 per cent) above the existing fee of 2.25 per cent if they raised 30 per cent of their inflows from places outside the top 15 cities. Despite the generous offer, 45 AMCs have managed to open a mere 52 new branches outside the top 15 cities. According to fund officials, even with the 0.3 per cent additional fee, it’s economically unviable for asset managers to open new branches. Sebi, however, does not buy this argument.
At a recent Confederation of Indian Industry MF summit, Sebi chief U.K. Sinha threatened to “disincentivise” AMCs that are not expanding to smaller towns and cities. This threat cuts into the AMCs’ rights to operate the way they deem fit, since the regulator has no right to tell them where to open new branches. Sebi should perhaps restrict itself to ‘regulating’ the industry, not ‘micromanaging’ it.
­— Shailesh Menon

Walmart Looks To Score With Clean-up Drive
There is more to the exit of Walmart India CEO Raj Jain than meets the eye. Even though his departure generally appears to be the fallout of the 18-month-old bribery scandal that hit the world’s largest retailer from Mexico to China and India, the reality may be something else.
Apparently, Walmart exerted tremendous pressure on Jain in the past few months to push for a favourable policy on foreign direct investment (FDI) in retail. Something Jain was unable to deliver on. Besides, the group’s store rollouts and financials were also below the targets agreed upon.
Walmart is currently working on an internal report for the US Securities and Exchange Commission on the money paid to officials to influence FDI policy. While the recent exits of top executives in Mexico, and now India, may give the impression of an internal purge, the facts may be quite different.
— Vishal Krishna

For The World, Shot In India
India may not allow beer commercials to be aired, but there is no bar on shooting alcohol ads here! Dutch beer brand Heineken has journeyed all the way to India for its latest global TV ad, made by Wieden+Kennedy Amsterdam. The ad called ‘Voyage’ features a rakish traveller who arrives in India with his pet goat. The lively young goat runs away with his beer bottles and there follows an exciting chase through palaces and fairs. But this isn’t the first time a global ad has been shot in India, though the frequency is now increasing. Peugeot’s 2003 ad ‘Sculptor’ was set here, Dulux’s ‘Let’s Colour’ 2010 global campaign had shots of Jodhpur and, more recently, luxury brands such as Canali and Zegna came down to shoot their global portfolios. Could it be that a glimpse of exotic India gives an edge to these brands? Ad honchos believe that with India becoming an important market for international brands, featuring the country in their ads is becoming key, and one is going to see more ad film crews arriving here.
— Chitra Narayanan