The US Changes Track 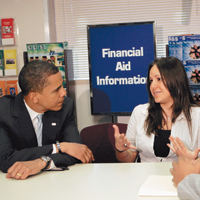 US president Barack Obama's $12-billion package to fund community colleges to "help make America the most college-educated country in the world and propel the nation out of its economic rut" has uncanny similarities with India. Community colleges offer two-year courses, like the courses offered at Industrial Training Institutes in India.

Upgrading the skills of class X-pass students through vocational training is what this system aims to do. Skill development is high on the priority list of India, too, and a number of schemes have been planned.

By focusing on skill development, Obama is trying to address the problem of American jobs being lost due to outsourcing to countries such as India and China. His efforts to "create connections between students and employers" have a direct similarity with India, where institutes imparting soft, vocational, trade-related skills are being opened virtually every day. Interestingly, $12 billion was the amount that international students were spending in the US on an average on tuition, living expenses, etc., according to a report by the Institute of International Education.

The US and the UK are the world's biggest knowledge hubs and are also among the biggest spenders on education.

Although far ahead of India on every parameter, they seem to have realised that when times are tough, people can be gainfully employed by enhancing knowledge and sprucing up skill sets. Going to a community college in the US costs a lot less than going to a regular college, as these are public-funded institutions, supported by local tax revenue.

Last week, China objected to the proposal by the Asian Development Bank (ADB) to fund a watershed management project in Arunachal Pradesh, claiming the Indian state to be its territory. But ADB overruled China's objection and approved $60 million for the project.

Besides coal deposits, oil and natural gas, Arunachal Pradesh has hydel resources with a potential of 50,000 MW of power, needing an investment of $15 billion. The state has launched major hydel power projects on Anjav, Nyamjung Chhu, Dilbang and Lohit river basins with an installed capacity of over 8,300 MW. These projects are environment-friendly as they don't need large dams. Reliance Power and Bhilwara Energy are the two major players with projects worth Rs 14,500 crore and Rs 1,700 crore, respectively.

China's foreign exchange reserves, the world's largest, have touched $2.133 trillion. Out of this, China holds about $763.50 billion in US treasury bonds. China has been advocating the need for an alternative to the dollar; last week, China allowed payments for cross-border transactions through renminbi, ostensibly to push it as a global currency.

AUTOMOBILES
China Drives Past The US

For the first time, China's auto sales have surpassed that of the US. Reports from the China Association of Automobile Manufacturers (CAAM) suggest that 6 million units were sold within first half of the year — a growth rate of 17 per cent year-on-year. This beats the US by a long shot, which sold only 4.8 million units in the same period.

Other than the downturn, protectionist policies such as manufacturing fuel-guzzling vehicles and giving in to trade union demands are some of the reasons why the US fared poorly. On the other hand, in China, the $565-billion package seems to have stimulated the economy.

If automakers have to make a comeback in the US, they would need to increase spending on clean technology. The US still consumes thrice the quantity of oil compared with China. Also, a company such as General Motors has only 907 green patents out of the 6,000 filed.

For now, it seems the American auto muscle has shrunk.
Vishal Krishna