The Twists And The Turns 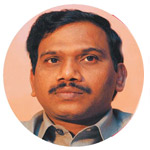 The allocation of spectrum has been controversial right from the beginning. The "first come, first serve" policy currently being followed has been severely criticised by the Opposition, which has called for the resignation of Communication and Information Technology Minister A. Raja. We take a look at the spectrum policy pursued by the past six telecom ministers.

The current minister says he followed the rules set by his predecessors. However, the implementation was bizarre. On 10 January 2007, the DoT website flashed a notice that licences would be issued. Operators who rushed to DoT were given forms to fill in. Those who applied for two or three circles had just two pages to sign; others had more paperwork to do. Whoever signed first and rushed their application was given priority. That's how Swan Telecom, which applied for two circles, came first.

1996: SPECTRUM BEYOND THE CONTRACTED 4.4 MHZ
Minister: Beni Prasad Verma
Secretary:M. P. Modi
Secretary's Next posting: N.A
He happily handed out additional spectrum of 1.8 MHz to the first and second cellular operators in various circles without any upfront payment. Bharti, Vodafone (Hutch), Idea, Aircel and Reliance Infocomm may have benefited. The exchequer got only the licence fee share, but some operators delayed the launch and the government lost revenues because of this.

2001: FIRST COME, FIRST SERVE
Minister: Ram Vilas Paswan
Secretary: Shyamal Ghosh
Secretary's next posting: Universal Service Obligation administrator
The original idea of first come, first serve for spectrum allocation for basic services was this minister's in the NDA government. He gave 5 MHz of spectrum to landline operators to get past the last-mile connection problem in inaccessible terrains using wireless technology. Many operators took this spectrum and used it to roll out another service called ‘limited mobility'.

2002: SPECTRUM BEYOND THE CONTRACTED 6.2 MHZ
Minister: Pramod Mahajan
Secretary: Shyamal Ghosh
Secretary's next posting: Universal Service Obligation administrator
He cleared a proposal for an additional 6.2 mhz of spectrum for cellular operators in Delhi and Mumbai, who had 500,000 subscribers or more. He proposed revenue-sharing model based on adjusted gross revenue. This led to a scramble for additional subscribers and prepared the pitch for mis-reporting of number of subscribers.

2003: UASL LICENCE FOR Rs 1,652 Cr (2001 Price)
Minister: Arun Shourie
Secretary: Vinod Vaish, Nripendra Misra
Secretary's next posting: Vaish became TDSAT member and Misra became Trai chairman
2003: FIRST COME, FIRST SERVE
He approved grant of uasl licencees on first-come, first serve basis. He pointed to the telecom regulator's recommendation and Paswan's policy. However, the bureaucracy was adamant on getting all the clearances before issuing the licences. This led to some firms being pushed back, depending on how many circles the companies had applied for.

2006: FIRST COME, FIRST SERVE
Minister: Dayanidhi Maran
Secretary: J.S. Sarma, Nripendra Misra, D.S. Mathur
Secretary's next posting: Secretary's next posting: Both Sarma and Misra became chairmen of Telecom Regulatory Authority of India (Trai)
2003: FIRST COME, FIRST SERVE
He issued 22 licences to run telecom services using 2G spectrum. However, he failed to release even a single MHz of spectrum to the licensees. He too followed the first come, first serve principle. However, he withheld spectrum allocation to Tata, Idea and Spice Telecom since a company like Bycell with no history of telecom service was first in the queue.