The Triggers Of Inequality 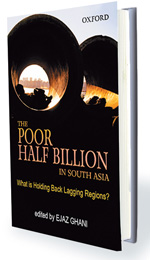 In South Asia, growth has picked up pace in the recent past, reducing poverty considerably. In the next 20 years, poverty should drop even more. Still, for now, South Asia paints a portrait of poverty and human deprivation. Particularly so after the World Bank pushed the purchasing power parity poverty line to $1.25 a day in 2008 from $1.08 in 1993. For the region, progress towards the United Nations Millennium Development Goals for poverty reduction does not look promising as some human indicators appear worse than in Sub-Saharan Africa.

Poverty has been debated widely in India; inequality less so. The fact is India (and other countries in South Asia) collects data on consumption expenditure, but not on income (other than through the National Council for Applied Economic Research). Inequality in consumption expenditure is lower than inequality in distribution of income. This point is important when one compares India's Gini coefficients (or other inequality measures) to China's. In identifying below-the-poverty-line households in India, the attempt has been usually to work with categories such as caste, ethnicity, gender and religion. But whether it is poverty or inequality, there are elements of regional deprivation too, conventionally equated with undivided Bimaru states — Bihar, Madhya Pradesh, Rajasthan and Uttar Pradesh. Further, there are intra-state differences and there are around 150 deprived districts.

Handling such regional variations is a tough policy question in India. The polity here is not like its Chinese counterpart. Given all these, The Poor Half Billion In South Asia is a valuable book on an under-researched area.

The book has nine papers divided into two sections — improving growth in lagging regions and a new approach to reducing poverty. The six papers in Part One are essentially descriptive. The three in the second part are normative and prescriptive. With the editor, Ejaz Ghani, involved in so many chapters, it is only appropriate that there is an overview from him. The comprehensive piece captures the essence of the book.

Rich regions in South Asia have experienced rapid growth and seem to be in a virtuous cycle. But the poor regions are trapped in a dual failure of the market and the state. The book asks whether poverty is a barrier to growth. Are there poverty traps? What are the reasons behind regional disparities? Is there anything policymakers can do to make growth more inclusive rather than waiting for growth to lift all boats? Says the book: "South Asia shows much slower convergence trends than the global sample… There is little evidence of persistent poverty traps at a regional level in South Asia, or even among developing countries as a whole… Limited mobility (new economic geography), inability to benefit from trade (globalisation), and high costs of doing business and high conflict rates in lagging regions (institutions) explain the limits to growth in lagging regions."

The book features a rich discussion on fiscal transfers, not as they exist, but as they might be. For instance, there is an emphasis on pro-poor fiscal transfers with improved governance. "Simply directing financial resources to lagging regions, however, may not be sufficient. It will need to be complemented with increase in capacity, accountability, and participation at the local level." Fair enough, but that is a tall order. One should also mention the role of institutions. The book has a chapter on this, though it skims over the issue. It might be a good idea to probe issues such as factor markets, the law and order machinery and, perhaps, even administrative delivery in a subsequent work.

Coincidentally, Ghani also edited a similar volume, The Service Revolution In South Asia, recently (OUP, 2010).Actually, a lot of policy-related work emanates from the South Asia Poverty Reduction and Economic Management unit of the World Bank. That is not always published as books, though it tends to be in the public domain. If this is a new trend, it is welcome.

Convergence-cum-divergence across states has been debated in India for some time now. With district-level data increasingly becoming available, many policy discussions now focus on districts, with ideas of decentralisation thrown in. Moreover, now there is the Naxallite question, and there are questions about what the government should do, beyond looking at it as a law and order problem. Judging by reports, the Planning Commission wants to throw more developmental expenditure at such troubled districts. Perhaps, it should read this book first.

Editor's Details:
Ejaz Ghani taught economics at Oxford University and Delhi University. He has worked on Africa, East Asia and South Asia. Ghani is an expert on growth, globalisation, employment and poverty. He is currently Economic Advisor of South Asia Poverty Reduction and Economic Management at the World Bank.