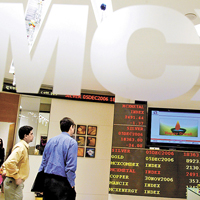 Fall Season
Exports fell 5.45 per cent in June owing to low demand from Europe and the US, government data shows. Imports also fell sharply, by 13.5 per cent. But thanks to the fall in oil prices, the trade deficit narrowed to $10.3 billion from $14.4 billion in May. The factory output grew 2.4 per cent compared to 0.1 per cent in April. But key sectors such as mining and capital goods stayed weak, with their year-on-year output falling 0.9 per cent and 7.7 per cent, respectively.

Rich Discovery
Bharat Petroleum and Videocon Industries have made a key oil find in Espirito Santo Basin, off the Brazilian coast. The two are part of a consortium, IBV Brasil Petroleo, along with Petrobras of Brazil and Anadarko of the US. The explorers discovered a 30-metre oil column. The consortium has 30 per cent stake in the block, while Petrobras has 40 per cent.

Win Some, Lose Some
IT heavyweight Tata Consultancy Services beat forecasts with a 37.4 per cent jump in net profits at Rs 3,281 crore for the quarter ended June, helped by a rise in outsourcing orders and a weak rupee. Rival Infosys, meanwhile, fell short with just 1.2 per cent profit growth, and cut its dollar revenue forecast for the year. Its revenues went up only 8.6 per cent. Meanwhile, LIC hiked its stake in Infosys to a record high level of 6.3 per cent, buying shares worth about Rs 2,000 crore.

Friendly Advice
Singapore Prime Minister Lee Hsien Loong says India has the potential to grow at 8-9 per cent over the next 5-10 years if it pushes economic reforms. He said India needs to capitalise on its large human capital and build on its success in the IT sector.

Banking On Spectrum
The Empowered Group of Ministers, headed by Home Minister P. Chidambaram, has allowed telecom companies to mortgage spectrum as collateral to raise bank loans. Banks will be given the rights to own or sell the spectrum in case defaults. The Department of Telecom will monitor the spectrum sale.

Low Flight
Ailing Air India has reportedly invited banks to bid for underwriting roles for the sale of government-guaranteed bonds worth Rs 7,400 crore. It will be the largest corporate bond sale to be guaranteed by the government. The sale is part of the effort to resuscitate the carrier through a $5.8 billion bailout.

Yahoo! Hacked!
Yahoo! has been the victim of a security breach that yielded hundreds of thousands of login credentials stored in plain text. The hacked data, posted on the hacker site D33D Company, contained more than 453,000 login credentials and appears to have originated from the Web pioneer's network. The hackers intended the data dump to be a "wake-up call". The company is investigating.

Warning Buffett
When Warren Buffett speaks, the world listens. The US business magnate has said that things have been slipping "pretty fast" in Europe over the past six weeks. "They'll get it worked out by 10 years from now, but right now there's no obvious answer."