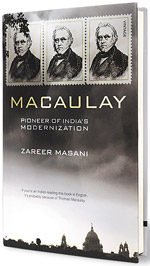 08 November, 2014
Print this article Font size -16+
Thomas Babington Macaulay is best known in India for his oft-quoted statement on recommending a policy that would produce “a class of persons Indian in blood and colour, but English in tastes, in opinions, in morals and in intellect.” To nationalists he epitomised English imperialism and his education policy was an insidious attempt to create a class of native collaborators for the Raj.

But Indians might not have assessed Macaulay fairly. For, this new biography, Macaulay, authored by Zareer Masani, shows the man in his wider social and intellectual context and puts to question the nationalist argument that English education in India was introduced merely to produce a class of brown collaborators.

Undoubtedly, Macaulay was an imperialist, but not a narrow colonial policymaker. He was, as Masani illustrates, a man of phenomenal intellect raised in the academic crucible of post-Enlightenment England. He was among those scholarly Englishmen of his times who genuinely believed in England’s civilising mission.

The demand for English education in India had been spearheaded not by the English, but by local Hindus who wanted desperately to learn modern sciences, classical literature and acquire practical skills. Progressive Hindus led by the likes of Raja Rammohun Roy had begun to challenge the traditional Sanskrit system of learning and its emphasis on religious texts and ancient versified literature at least two decades before Macaulay’s Minute.

The East India Company directors and their powerful backers in London, who included people such as historian James Stuart Mill, wished to perpetuate the Orientalist policy of fostering native learning. The Orientalists felt that Indians would best develop if they stuck to their traditional learning systems and languages.

Macaulay’s arguments constituted a frontal attack on the Orientalists. He said, among other things, that thousands of Sanskrit and Arabic books printed at government expense were lying unsold, while English books were being bought by Indians at market prices. He felt it was the duty of the government to teach English to Indians as whoever “knows that language has ready access to all the vast intellectual wealth which all the wisest nations of the earth have created and hoarded in the course of ninety generations.”

Macaulay also predicted that English “is likely to become the language of commerce throughout the seas of the East…(and) of all foreign tongues, the English tongue is that which would be the most useful to our native subjects.”  He was prophetic and as a blurb on the book suggests: “If you’re an Indian reading this book in English, it’s probably because of Thomas Macaulay.”

Masani’s book, written with great flair and after considerable research, brings to life the strange but human personality Macaulay was —  his voracious appetite for books, penchant for argument and his extreme love of his sisters.  The book is full of little known facts about Macaulay, including the fact that he virtually wrote the Indian Penal Code by himself. He was also the architect of a move that ensured press freedom in British India, even though, as Masani recounts, local British journalists of those times had selected him for personal attack. Macaulay was dubbed a “cheat, swindler and charlatan” for championing the equality under law of all British subjects, whether European or Indian.

Despite his obvious admiration for Macaulay, Masani’s biography does not suffer from being unidimensional; it shows him with all the warts, especially his belief in the inherent superiority of European knowledge and extreme prejudice against Hinduism. It also portrays him as a man trapped in his books, derisive of most of his fellow men and incapable of developing deep emotional bonds beyond those with two of his sisters.

The book is not centred on Macaulay’s Indian interlude, but is a fast-paced narrative of his rise from humble middle class origins to fame and fortune. Though Macaulay first found fame for his political activities, global acclaim came to him largely because of his books, including his celebrated The History Of England (1848), which was translated into virtually every European language during his lifetime.

Macaulay was granted a peerage towards the end of his life and thus became the first Baron Macaulay of Rothley. By then, he was already a living legend and the setting for his death the next year was appropriate: slumped on a chair in his library with an open book beside him.