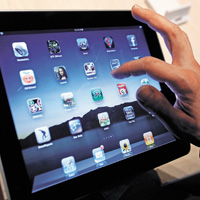 08 November, 2014
Print this article Font size -16+
In tech world, each year is marked by the beginning of a disruptive trend. Year 2007 was about the iPhone and the beginning of a smartphone culture, which altered the entire industry and made smartphones hip in schools and boardrooms alike. The following year came ‘apps' (short for applications), which led us to loosen our purses to purchase software to waste our time. In 2009, netbooks — cheap, ultra-portable but under-powered laptops — became a household name. Who knew that a gadget targeted at road warriors would become popular with grannies, for video calling their kids settled abroad?

This year, the buzzword is Internet tablets — slate-like devices with touchscreen input that connect to the Web — following the spectacular launch of Apple's iPad. Be prepared to be swamped by dozens of these next year.

The concept of an Internet tablet is not new.

In fact, we have had them for almost a decade now in the form of expensive laptops that had swivelling touchscreen displays. Only, the concept has been turned on its head and now some can be bought under Rs 30,000. Internet tablets of 2010 are closer to smartphones than to laptops. Most of them even have a SIM card slot. Here's a look at three of them that are available at the moment and a few more forthcoming ones.

Apple iPad
iPad was introduced this January as a device for consuming content — Internet, movies, magazines, newspapers, games and, of course, apps. The iPad is a bigger iPod Touch/iPhone with a 9.7-inch display. It has almost all the features (barring the ability to make calls or click pictures). The cheapest model — 16 GB, Wi-Fi only — is priced at just $499 (about Rs 22,500) and the cheapest one with 3G connectivity at $699 (Rs 31,500).

The iPad's 1024 x 768 pixel touchscreen display is sharp and easy on the eye. But the downside is that many iPhone apps open in the middle of the display with a thick black border. For such apps, Apple offers an option to magnify the app to cover the entire display. The good news: all popular developers are creating iPad apps; already, there are over 25,000 apps available on Apple's App Store.

What we missed on the iPad is probably a camera (or two) to use a video calling feature recently launched by Apple called FaceTime. To be fair, FaceTime was launched months after iPad, and we believe iPad's next version will feature two cameras. Then, having a large 9.7-inch display is good for watching videos, browsing the Web and reading magazines, but it makes the iPad difficult to hold with one hand and operate with the other.

iPad is ideal for those who already have a smartphone for Internet browsing while on the move. If it is content consumption that you are looking for, don't look beyond the iPad. But there is just one glitch — Apple is yet to launch it in India. So, you would have to either get it from one of the many countries where it is available or simply recce your nearest grey market.

Samsung Galaxy Tab
With its Galaxy Tab, Samsung is the first major handheld vendor to take on iPad. Running on the latest 2.2 version of Android operating system (OS), Galaxy Tab is smaller than the iPad. It has a 7-inch display and has been designed to fit the back pocket of your denims.

Of the three Tablets we are reviewing, the Galaxy Tab has the most impressive build quality. The plastic casing feels good to hold with its curved edges and a hint of curvature on the back. At 380 gm, it is much lighter than the iPad 3G (730 gm) and also thinner (12 mm), making it easier to hold and use over longer durations. Galaxy Tab also scores over iPad with its 3.15 megapixel camera at the back and 1.3-megapixel camera in the front. It also has a microSD card slot, unlike the iPad.

On paper, the Tab might look pretty impressive against the iPhone, but it stumbles as soon as we start comparing on the software front. Unlike iOS, which was modified for the iPad, Android is not ready to be implemented on Internet tablets — a fact acknowledged by Google. So, if an app is not compatible with the display, it renders in the middle of the screen. Plus, there is no way to find out compatible apps in the Android market, so downloading apps for Galaxy Tab is difficult.

However, there are some pre-installed apps on the Tab — an app to handle MS Office files, a GPS navigation app with maps for India; and a reader hub to buy newspapers, magazines and e-books. The newspaper app could have been a big deal had the pricing been affordable — a single edition of an Indian newspaper costs $0.99 (approximately Rs 45)!

The biggest undoing of the Galaxy Tab is its price — Rs 38,000 — making it exclusively for those looking for flaunt value.

Olive Pad
Like Galaxy Tab, OlivePad — the first Android tablet from an Indian company — also runs on Android 2.2 and features a 7-inch display with two cameras (3 megapixel at the back and a VGA camera in the front). But, that's where the similarity ends.

OlivePad comes across as two glass panels held together by a metallic frame. While it is marginally thinner than Galaxy Tab, it actually feels thicker and heavier in your hand. It features an 800x480 pixel display, the same as smartphones with smaller 3.5-4.3-inch displays. This results in a slightly inferior experience when watching multimedia content.

The advantage of the lower display resolution is that all apps from the Android market render properly, unlike on the Galaxy Tab. Olive has also pre-installed some apps — navigation from MapmyIndia, an MS Office compatible productivity suite from DataViz (Docs-ToGo) and a mobile TV app called Zenga TV.

But OlivePad falters in overall execution. The custom homescreen only works in landscape mode, and the touchscreen response is not in the league of iPad or Galaxy Tab. Its mirror finish body is not only a fingerprint magnet, but is also fragile. The 600-MHz processor is much slower than the 1-GHz processors powering the other two tablets.

Olive makes up for these drawbacks with an affordable price of Rs 25,990.

The author is the co-founder and editor of CellPassion, a magazine and a blog for cellphones.