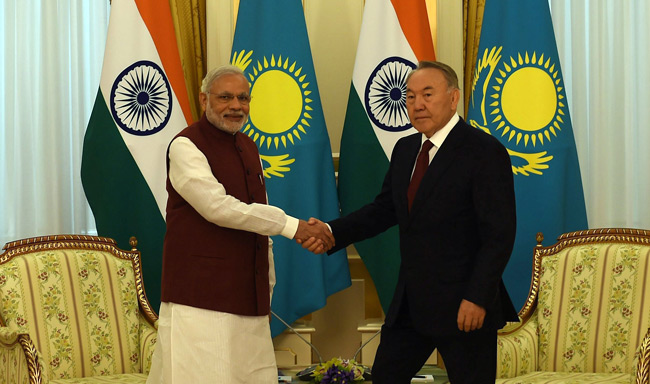 Prime Minister Narendra Modi's ongoing visit to Central Asian nations as also Russia is likely to boost strategic and energy cooperation with the region. The visit is likely to give a roadmap for making India's connect-Central Asia policy into a strategic action plan at a time when China is focusing more on the region and the US presence in Afghanistan, adjoining many Central Asian countries, is diminishing, according to a report in The Hindustan Times.

Consequent to India increasing foreign direct investment (FDI) up to 49 per cent in the defence production, its economic relations with Russia are expected to see a dramatic change with the Prime Minister's visit to the CIS countries giving an extra push to strategic ties with the region, industry body Assocham has said.

“Diplomatic sources said the Prime Minister's visit to the 5 states, which was last done by PM Nehru in June 1955, will have a three-fold focus: energy, exports, and as a counterpoint to China's inroads in the region. Between them, the five states control the most energy-diverse and oil-rich parts of the world, with Kazakhstan a major oil producer, Turkmenistan and Uzbekistan with the biggest natural gas reserves, and Tajikistan and Kyrgyztan understood to have considerable untapped reserves”, writes Suhasini Haidar in The Hindu.

Modi will see the inking of a deal on setting up a urea factory in Turkmenistan, and spur the long-in-the-works Turkmenistan-Afghanistan-Pakistan-India (TAPI) gas pipeline. Modi's visit is much-delayed reciprocity for Turkmen President Gurbanguly Berdimuhamedov's visit to India in May 2010 — the last Indian Prime Minister to be in Turkmenistan was P V Narasimha Rao, back in September 1995.

Terming Modi's visit to Central Asia a "landmark" event to revitalise our ancient links with the region, the Confederation of Indian Industry (CII) has estimated that trade with the five Central Asian countries of Kazakhstan, Turkmenistan, Tajikistan, Uzbekistan and Kyrgyzstan can grow manifold from the small base of $1.4 billion currently.

For the five republics, relations with India would prove to be a balancing factor, with both China and Russia pushing to gain more influence and firmer foothold.

On Wednesday (08 July), India and Kazakhstan inked five key agreements including a defence pact to enhance military cooperation and a contract for supply of uranium after Modi and Kazakh President Nursultan Nazarbayev held comprehensive talks in which they decided to actively engage in the fight against terrorism and extremism.

Modi, who held restricted as well as delegation-level talks with Nazarbayev, noted that they also agreed to work closely to expand bilateral trade by addressing structural impediments between India and hydrocarbon-rich Kazakhstan, reports Press Trust of India.

Eminent journalist C Raja Mohan writes in The Indian Express that deciding to travel to the region early on in his tenure, Modi is signalling change. As he travels across Central Asia, Modi will find that shifting tectonic plates have shattered the regional balance of power and are threatening the internal stability of its regimes. Modi will need much diplomatic skill and even more purposeful policies to seize the new geopolitical opportunities that are coming India's way, and overcome the many traditional constraints on Delhi's regional engagement.

According to Assocham, the recent hike in FDI limit to 49 per cent is expected to bring more investments, particularly from Russia into the defence sector.

Earlier, FDI limit of 26 per cent was the main hurdle holding back global OEMs (original equipment manufacturers) from investing in the Indian defence production, it said.

Modi will have an extended meeting with Russian President Valdamir Putin on plans to further India-Russia ties, that have seen a surge in goodwill after the government sent President Pranab Mukherjee to attend the 70th commemoration of world war II in Moscow, despite a boycott from western countries.

India-Russia bilateral trade of about $7 billion has not only remained much below the potential, it has also remained highly skewed for a few items besides defence sector.