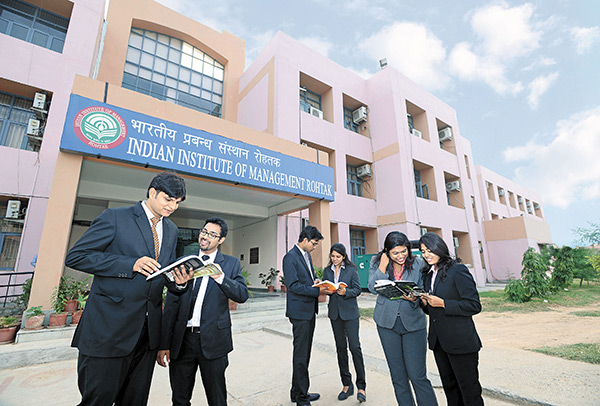 02 December, 2014
Print this article Font size -16+
Good infrastructure, competent faculty and committed students are to a B-school what food, clothing and shelter are to humans. Basic. Unfortunately for the newly set up state-run management institutes — the Indian Institutes of Management (IIM) at Rohtak, Udaipur, Shillong, Tiruchirapalli, Ranchi, Raipur and Kashipur — the ‘basics’ are missing. Even the IIM legacy hasn’t quite helped the case of the new schools located in far-flung areas. Students, faculty and recruiters are keeping away from them. The geographical disadvantage, however, is just one of the many challenges these startup IIMs face.

Infrastructure
To be a world-class institution, a B-school must offer more than just regular classes. It has to hold guest lectures, seminars, fests, contests and a host of other activities for the all-round development of students. Going by this yardstick, it is not difficult to see why the new IIMs are struggling to turn into attractive propositions. Yet to move into their own campuses, the new institutes are essentially functioning out of makeshift facilities, lacking the required infrastructure. IIM Shillong, for instance, set up in 2007, is still operating from a ‘transit’ campus.

“Inviting guests under management development programmes would have been easier if we had our own campus. It is difficult to arrange 70-80 rooms given the few hotels in the area,” says P. Rameshan, director, IIM Rohtak. His institute has only five dedicated rooms at its current campus — at the Maharshi Dayanand University.

The story of the other new IIMs is pretty much the same. In fact, the situation is so bad that every year interviews for admission are conducted in hotels or off-campus centres, jointly by all seven.

Faculty
Any institute is defined by the quality of faculty it has and its student-teacher ratio. Top management institutes in India have, on average, nothing short of a 50-member full-time faculty. The new IIMs are, however, functioning with only 20-odd full-time faculty members. As a consequence, the institutes haven’t grown beyond 120-odd students to a batch.

In 2008, the Bhargava committee recommended that the existing IIMs mentor the new ones to give the latter a headstart. The suggestion was, however, widely opposed as the established ones were also facing a faculty crunch.

The situation hasn’t improved since. Against the sanctioned faculty intake of 120, IIM Ahmedabad, for instance, is still functioning with only 93 full-time faculty members. Having added only nine faculty members since October 2012, the institute declared this year that those “not having a Ph.D degree could also be considered for appointment”. So, clearly, the institutes have started compromising on quality. Rishikesha T. Krishnan, director, IIM Indore, says: “Though the ideal faculty-student ratio is 1:10, we have just 73 faculty members for 1,450 students.” The institute augments its faculty through temporary and visiting faculty.

The new IIMs, too, are doing something similar. Their directors are officially seeking help from their mentor IIMs and also tapping into their personal networks. Janat Shah, director, IIM Udaipur, gets faculty from IIM Bangalore to teach at Udaipur in addition to some support from IIM Indore. “I was with IIM Bangalore for 20 years, and because of the personal relations I had, faculty members from IIM Ahmedabad and Bangalore come and teach at our campus and mentor our faculty,” says Shah.

IIM Udaipur has 20 full-time faculty members teaching core courses. The electives are taught by visiting faculty. Shah terms this exchange as “flexibility to get experienced faculty to teach”. According to him, the location of the campus and travel time play a key factor in getting visiting faculty. Prafulla Agnihotri, director, IIM Tiruchirapalli,  agrees with him. “Faculty from, say, IIM Calcutta, would have loved to come if we were in Chennai. Besides, flying them down would be easier as there is a direct flight,” he says.

Recruitment
The new IIMs also find it difficult to close placements at one go. In 2014, they took more than four months, on average, to get students placed. “For existing IIMs, it is easier to convince recruiters,” says Shah of IIM Udaipur. Again, their remote location is the reason recruiters avoid going to the new IIMs. Says Agnihotri, “Recruiters prefer going where there is a direct connection, or to places that are well connected.”

Recruiters, however, don’t think that’s true. “Our hiring philosophy is focused on the potential we see in students. While we do not restrict ourselves in the pursuit of talent, we have had considerable success in unearthing top talent from premier engineering colleges and business schools in India,” says Raj Raghavan, director, Human Resources, Amazon India, one of the top recruiters at IIMs.

Echoing Raghavan, Sukhpreet Kalra, lead, Recruitment, Accenture India, says, “The location of these colleges makes no difference to us; it is only the relevance of the talent pool.” Adds K. Ullas Kamath, joint managing director, Jyothi Laboratories: “It is one’s willingness to learn new things that is more important.”

The Way Ahead
There’s no denying that the new IIMs have a long way to go before they attain the benchmarks set by their predecessors, but the government is partly to blame for their plight. It is reliably learnt that the existing IIMs had made 15 suggestions to be kept in mind while setting up new IIMs, location being one of the key suggestions. While the schools are up and running, the government is yet to act on those suggestions, says an IIM official.

With the new IIMs struggling to make their presence felt, it is clear that merely setting up more institutes is not the best way to carry forward the IIM legacy.  While it’s true that older IIMs too started out with few faculty members and average placements, the newer ones are expected to deliver faster, to stay in the race. It is not enough for the new IIMs to merely catch up with older IIMs; they must also fend off competition from private institutes that have begun moving beyond metros to tier-II cities.