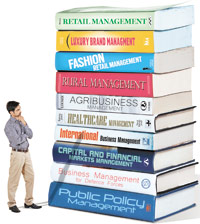 08 November, 2014
Print this article Font size -16+
Not so long ago, a management degree meant moulding an individual for an organisation, no matter what the functional area or industry was. An MBA stamp from a good college was enough to become an HR manager in an automobile company or a marketing manager in the hospitality industry.

Times are changing with companies demanding employees who are ready to hit the ground running. With tight budgets in a slow economy, corporate training budgets are under a squeeze. This has led B-schools to create courses that provide expertise to a student in a definite area of work or industry.

Madhur Verma, vice-president, operations, at Columbia Asia Hospital, is recruiting for a hospital in Ahmedabad, and would prefer to hire a student who has specialised in Health Management rather than someone with a regular MBA. “Such candidates have a better outlook on the industry and understand the nuances.”

“A specialised course also fetches better salary in the early years. It can give you a headstart; but, in the long run, it’s performance that counts,” he adds.

Earlier, specialised courses were limited to electives, and were in functional areas like marketing, human resources and operations. There were also some unique courses such as healthcare management, rural management and business management for defence officers, which have been around for nearly a decade now. For other niche courses, students had to go abroad.

In 2011, the lack of specialised courses in India led Prateek Khare to a university in Glasgow, where he did an MBA in new venture management. Later, he got a job at Swissnex India, where he connects Swiss innovation hubs and entrepreneurs with Indian markets.

Khare is just one of the many students who are following a similar route. Natasha Chopra, director of The Chopras, an education consultancy, says there has been a drop in the number of students going abroad for regular MBAs, “but that has been made up by the numbers applying for niche courses such as supply chain management, luxury brand management, and others.”

Customised Solutions
Indian B-schools are now playing catch up. But most of their specialised courses are still focused on senior executives and are of short duration.

“The turmoil in the job market in the past few years has made everyone rethink the MBA programmes. Students want courses where employment and skill development is guaranteed,” says Raj Agrawal, director of Centre for Management Education at All India Management Association (AIMA) which, for instance, has started a retail management course. Given the 35-40 per cent growth in organised retail in India, and being one of the most attractive emerging markets for investments, other institutes, too, such as Welingkar Institute and YMCA, have been quick to launch an MBA in retail management.

Another course gathering pace is management of family businesses. “Many family-run businesses slowly fade away by the time they reach the second or third generation,” says Deepak Chandra, deputy dean at Indian School of Business (ISB). There is a serious need to address this problem since 55-60 per cent of market capitalisation in India comes from such businesses, he says. ISB’s current batch of 50 in its family business management course
is also its first.

Most institutes start such courses as initiatives after studying industries and identifying the areas that will need expertise and knowledge-driven workers.

Then there are courses that are launched as an industry effort to train individuals to tackle an existing area. An MBA in real estate and urban infrastructure by Amity University, in partnership with the Royal Institution of Chartered Surveyors (RICS), is an example. “It is essential that specialised academic courses like these are linked with industry to ensure employability,” says Sachin Sandhir, managing director of RICS.

Providing another kind of link are institutes such as IIM Indore, Management Development Institute (MDI) and Narsee Monjee Institute of Management Studies (NMIMS), which are offering management courses to armed forces officers who are taking premature retirement for a second career. The courses focus on training them in basic skills of management, and leadership, and how to fit into a civilian workplace. Although the courses are niche, they are gaining popularity. NMIMS has been offering this course for three years now, completing six batches; the seventh batch — with 38 students from the Army, Navy and Air Force — is in progress. The programme is offered in collaboration with the Ministry of Defence, and has no age bar.

Employability, better salaries and an edge over others is what students now want from their MBA courses. Unlike in the past, when the primary reason to join an MBA course was to get a job, today, it is an investment aimed at a quantum jump in career.