Social media analysis has shown that Flipkart's 'Billion Dollar' sale campaign is a runaway hit among digital shoppers, logging three times the number of mentions on social media compared to its closest rival, Amazon. However, festival bargain hunters seemed to prefer the Amazon site that clocked 52 percent visitations of the digital shopping universe compared to Flipkart's 50 percent. This also points to the fickle loyalty of shoppers who prefer to constantly compare prices of contending eTailers before making a buy. 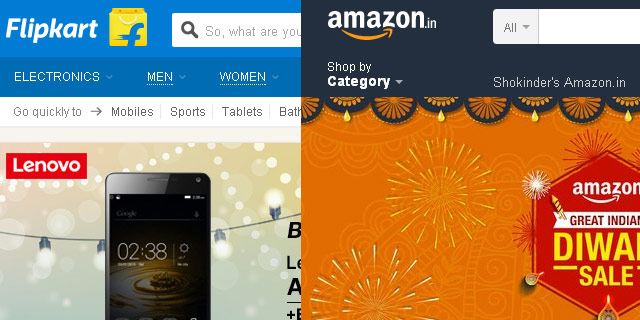 17 November, 2015
Print this article Font size -16+
On 13-17th October two of India’s biggest online retailers Amazon and Flipkart launched their annual sale events.
Digital marketing research consultancy MindShift Metrics analysed their social media impact  on Facebook and Twitter during the five-day sale period with a survey conducted with their consumer and expert panel.
Flipkart started (or rather restarted) its Big Billion Days campaign (#BigBillionDays) by highlighting that the big billion days are back. Since, Flipkart used the same campaign name it led to a better brand recall and most posts on socialmedia.
Flipkart got 3,11,110 people talking about its annual sale on Facebook and Twitter in contrast Amazon could excite 1,14,315.
Along similar lines, Flipkart’s brand uplift was higher too.  Flipkart’s fans on Facebook increased by 64,104 (1.26 per cent increase) whereas Amazon increased by 17,622 (0.35 per cent growth).
Arif Khan, Planning Director at advertising agency Cheil India Gurgaon said, 'Flipkart's Big Billion Days had a first mover advantage with the TVF video they launched ahead of the sale.”
Amazon backed this annual event by two contests. The first one was a Dubsmash contest which was promoted with the "Try Try Try" jingle. The next contest was about sharing one’s reaction on winning 1 kg of gold. The lucky winners of each of the contents were promised vouchers worth Rs 10,000.
Khan of Cheil India feels, "Amazon tried to do too many things at once. The result being not a consistent theme but rather chaos on digital."
On Twitter, especially in relation to hashtags, Flipkart was five time more effective than Amazon. This was because Flipkart used the same hashtag #BigBillionDays for all the five days whereas Amazon used a different hashtags each day, such as #AmazonSaleDay2, #AmazonFestiveDay3.
This also impacted the tweets’ reach. Flipkart’s tweets reached 13 million users when Amazon’s tweets were viewed by 1.9 million users only.
Ankita Gaba, co-founder, Get Evangaized said, “Any brand on this planet can have a name that has "Indian" and "Festive" in its campaign or communication. Big Billion Days seem like one that has now stuck to Flipkart."
What also created a lot of shares on social media was Sachin Bansal (CEO, Flipkart) and Binny Bansal going out to deliver the orders to customers, taking selfies with them and posting those pictures on social media. This created a nice personal touch to their campaign.
Impact
MindShift did a consumer survey among 72 respondents  who were 21 - 40 year olds from Mumbai, Delhi and Bangalore and a survey with a digital media experts, to understand the consumer reaction as well as the industry reaction.
Just as Flipkart had more social media impressions, more number of people were aware of Flipkart’s Big Billion Days. 97 per cent of respondent knew about Flipkart’s annual sale whereas 82 per cent knew about Amazon’s Great Indian Festive Sale.
This was probably due to the reach of #BigBillionDays which was 13 milllion compared to 1.9 million of Amazon on Twitter.
What was quite a contrast was inspite of the huge difference in social media awareness among the two brands, app/website visits and the claim for purchases among respondents was very similar. 52 per cent people visited Amazon India whereas 50 per cent checked out Flipkart’s deals.
The success can be attributed to different triggers for both the brands, from rotating deals on Amazon to dedicated days on Flipkart, from giving away gold as gratification by Amazon to home deliveries by the top management of Flipkart. This can also be attributed because Flipkart's Big Billion Day was an app-only shopping event and Amazon India allowed customers to access the deals on the web as well.
Tags assigned to this article:
flipkart amazon social media Big Billion Sale MindShift Metrics sonal khetarpal