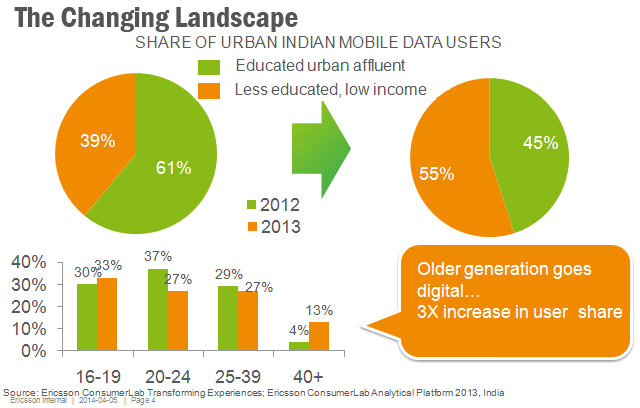 08 November, 2014
Print this article Font size -16+
If you see people in buses, trains, offices and in the street peering into smartphones, do not be surprised. They are doing what millions of Indians are doing with their smartphones. The Ericsson ConsumerLab Report 2014 conducted across 4,000 Android smart phone users in 18 cities across India has come up with interesting findings.

It discovered what most of us already know — that we as a country are addicted to our smartphones. We are quite addicted going by the fact that Indians check their smart phone on an average 77 times a day. That’s only the average. Around a quarter (26 per cent to be exact) check their phones above 100 times a day. That works out to a neat 198 minutes (3 hours and 18 minutes) spent on the smart phone. It is more than the 128 minutes that people spend daily on an average watching TV. Interestingly, it is more than 50 per cent higher than the 122 minutes that Americans spend on their smart phones.

About a third of the time is spent on apps. This is a 63 per cent increase in app usage over the past two years. Also, now less educated, low income users account for 55 per cent of smart phone users. That’s 16 percentage points higher than the 39 per cent in the previous survey. Another interesting dynamic for telecom operators is that the share of older users (over 40 years) has trebled from four per cent to 13 per cent now.

When do you use your smart phone the most? Almost 40 per cent use their phones late at night in bed, while another 23 per cent are peering into their smart phones while having dinner. That’s not surprising as 68 per cent of all mobile minutes on the smart phone are at home. Another find is that 12 per cent of Indian housewives user their smart phones as video playing devices since they do not have access to the home TV.

But despite the appetite for smart content, Indian telecom networks are still lagging behind. Around 44 per cent of the time smart phone users do not have mobile broadband coverage. Also half of the mobile broadband issues faced by users are while indoors and not outside.

The increased usage of smart phones has simply raised the expectations of people. Around 41 per cent of users expect the operator to provide a consistent mobile broadband experience at all times. Not surprisingly, the consumer is now willing to pay more for better quality services. A good 76 per cent of the users are willing to pay more for guaranteed better mobile experience.

That’s the consumer that Indian telecom operators need to tap.