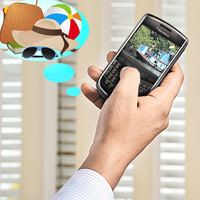 08 November, 2014
Print this article Font size -16+
Google India released a study conducted by IPSOS titled 'Multi-screen traveller' which aims to understand the behaviour of smartphone users in India and its impact on the travel vertical — focusing on a target group which uses multiple devices to get online for their travel related needs. The study revealed that  76 per cent users use both computer and mobile across all travel stages (dreaming, researching, booking, experience, sharing) while 60 per cent  users move from one device to another when they switch from researching to booking.

IPSOS spoke to 1500+ leisure travellers, 20 - 45 year olds, across 8 metros in India. 80 per cent of these respondents had smartphones, and 25 per cent had taken international trips, and 35 per cent had done business trips the survey found that 87 per cent users said that they have used mobile phones to research about their trips and 66 per cent respondents also booked a trip element on it. 60 per cent said that the information they find while researching on their mobile phones influences their booking decision.

In terms of triggers for holiday planning, online sources were rated higher than offline media with Internet getting 5 touch points in comparison to offline which offered 2 touch points. The biggest triggers for holiday destinations/planning were online pictures where 88 per cent users said that online pictures trigger their holiday planning. Browsing pictures on social networks, blogs, travel sites get users to start thinking of their next vacation destination.

In the planning and research phase, the target group did not differentiate between their choice of Internet access device- user's rated using desktop, mobile and tablets at over 85 per cent — clearly highlighting the multi-screen behaviour of the users for holiday or trip planning.  Smartphones and tablets were also the first go to devices for travel researchers even at home.  Convenience was rated as the biggest motivator for use of mobile.

"We already know that smartphone users on an average spend 76 minutes on the internet through their mobile. The smartphone user base is set to explode in India to touch 70 million by end of this year. Over 1/3rd of travel related search queries on Google India are now coming from mobile and tablet devices, with queries from smart phones growing at 397 percent YoY," says Vikas Agnihotri, Director, Travel and BFSI at Google India. Agnihotri believes that with travel being the most evolved and mature vertical, the findings from this study will help them to devise strategies to engage the users across multiple online screens/devices.

The study also highlighted that the Indian travel planner goes through a variety of resources around destination research, like browsing through pictures on social networks (74 per cent), reading trip information on travel sites and apps (56 per cent) and watching videos about destinations (52 per cent). For booking and sharing, mobile app usage was 12 to 15 per cent higher in comparison to mobile sites. 36 per cent users said that they booked a flight on a mobile, while 25 per cent have booked a hotel room and 13 per cent have submitted a holiday lead from their mobile device.

While on the trip — users also showed high usage of Internet from their mobile phones. Mobile was used as the information and communication wallet when travelling. 74 per cent respondents said they shared or posted on their social network and 46 per cent respondents re-scheduled a trip element using the phone. Over 30 per cent checked maps, weather and events from their mobile phones on a vacation. Post holiday, over 50 percent respondents said they uploaded photos and posted reviews using their phones and interestingly over 10 per cent had started researching for their next holiday.
Tags assigned to this article:
exclusive to web social media travel smartphone internet ipsos google india mobile internet