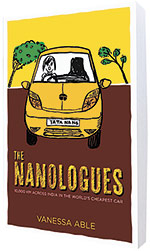 08 November, 2014
Print this article Font size -16+
In a land where driving on the roads has no associated Vulcan logic, Vanessa Able drives the World's cheapest car covering 10,000 odd kilometers around the country, alone. With a car named Abhilasha, GPS named Delilah and Ganesha on your car's deck and loads of advice from fellow friends and well-wishers, chances of going astray are very rare. The British author, former editor-in-chief of Time Out Magazine, nevertheless, takes her chances with her steed - a yellow Nano LX - in this adventurous journey spanning the length the breadth of India.

The author recounts her experiences with doddery trucks, shifting gears, rear view mirror chronicles, blaring horns and high-beam horrors as she tries to keep sanity intact on the road and her resolve constantly put to test. The production line of the Nano, rendezvous with Ratan Tata, kids running around her car or a Maharaja who wanted to buy her Nano, figure along with her travails of finding places for a loo-break in this beautifully narrated travelogue. Her literary excursions with the sign 'Horn OK Please' painted at the backside of trucks and various other road signs tickle the funny bone somewhere.

Able also gives a brief introduction to behavioral economics wherein she talks about 'aukaat' and 'jugaad'. The pecking order of the road does place Nano at the bottom of the highway-pyramid, and so does the mindset of a middle-class family when she succinctly states 'who wants to be seen driving the cheapest car on the market if you're trying to show yourself as being on the up?'

On her return to Jersey, the author compares herselves to a cat among the pigeons as her maneuvers are something of an errant on Orwellian roads. Her skills acquired subconsciously in India are reflected rather hoarsely when she honks rather impatiently at a pregnant woman in a car park.

The author's three month long journey is converted into what she claims as this 'over-sentimental silent eulogy' as she whizzes and zooms past vehicles by the end of the journey. The book is an enjoyable read and is littered with Brittishisms all throughout. The latter along with adequate research on each of the places infuses a much needed vigour in this travelogue than making it sound as if the author is driving from Point A to Point B.