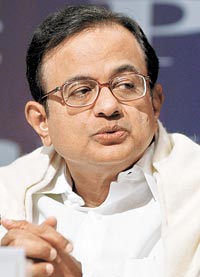 08 November, 2014
Print this article Font size -16+
After lighting a gold lamp mounted by a stiff-looking peacock on 3 September, the finance minister expressed views on the economy that were quite balanced on balance. His message to his captive audience, commissioners and directors general of income tax, to be friendly towards their victims, must have sounded bizarre to them, for how can taxpayers be made to cough up except by strong-arm tactics? Tax collectors are not entirely devoid of charm. The evidence was before P. Chidambaram; as he noted, his taxmen were likely to achieve the revenue target in the second half of the fiscal year even after allowing for refunds. He is obviously aware of his taxmen’s charm offensive: towards the end of the year, they visit big taxpayers and request them with a smile to pay more tax than they are liable to. They would get a tax refund eventually; meanwhile, the taxmen would be able to demonstrate to the finance minister that they have achieved the target, which makes no distinction between collection of taxes that are due and that are not due. Strangely, although Mr Chidambaram is aware of this hocus-pocus, he does nothing to discourage it. He should have told his audience that their duty was to collect the tax due and not a penny more; the practice of making people pay more than they owe is entirely pernicious, even if those people pay as much tax as the finance minister.

It is unfortunate that the finance minister encouraged his staff to achieve collection targets by hook or by crook. He did not, of course, put it quite that way. But telling them to raise the corporation tax collection rate from 24 to 26 per cent comes to the same thing: collect more from the corporates whether it is due or not. He clearly shares his revenue collectors’ view that tax concessions and rebates given to corporates are just so many undeserved handouts, and that anyone who pays tax less than the maximum rate is a thief. If some companies are paying 11-12 per cent tax on their profits, that is because of privileges given to them by Parliament for what it considers nationally desirable purposes. If the minister has any objections to them, he should, instead of making snide remarks on the side, go to Parliament and persuade it to repeal the concessions he does not like.

He was properly circumspect on the abolition of capital gains tax on sale of stocks and shares and a compensatory increase in securities transactions tax. Avoiding capital gains tax is easy: all one has to do is to book commensurate capital losses by selling off one’s unwise investments towards the end of the financial year. As a consequence, capital gains tax yields little, and abolishing it would cause little revenue loss. There is no need for an increase in some other tax to compensate for it. The securities transaction tax was invented by P. Chidambaram in an earlier financial incarnation with the help of P. Shome, whom he has now called in to repair the damage done by P. Mukherjee, his predecessor in the finance ministry. It forces stockbrokers into enormous paperwork for a paltry revenue. It is a thoroughly undesirable tax; the earlier it is abolished, the better.

But abolition of taxes would be anathema to a finance minister who is hung up on achieving a minimum tax-to-GDP ratio. It is unclear why he hit on a target of 12 per cent. Starting from last year’s 10.1 per cent, 11 per cent would have looked too modest, and 13 per cent might have been considered unlucky. He thinks 12 per cent is too low because it is higher in other countries. This shows that he is a victim of the good country complex.

Whenever government types lack a good argument for doing something silly, they say that it is done in some good country like Papua New Guinea. The finance minister is the most intelligent member of the present Cabinet; he should be able to think up a less stupid argument.

If he lacks a good argument but still wants to raise the tax-GDP ratio, he should simply put a couple of extra points on the rates of major current taxes such as income tax and goods-and-services tax. Alternatively, he should abolish tax concessions. Above all, he should avoid complicating the tax system.

Taxes are not just an imposition on citizens; they also cause a lot of headaches and heartaches in filing tax returns and chasing refunds. Mr Chidambaram may not believe in minimising the burden; but he does not have to go out of his way to make taxpayers’ lives miserable. He has recently gone all the way to Chicago in his search for a chief economic advisor; he should ask him to tell him about the best tax systems of the world.