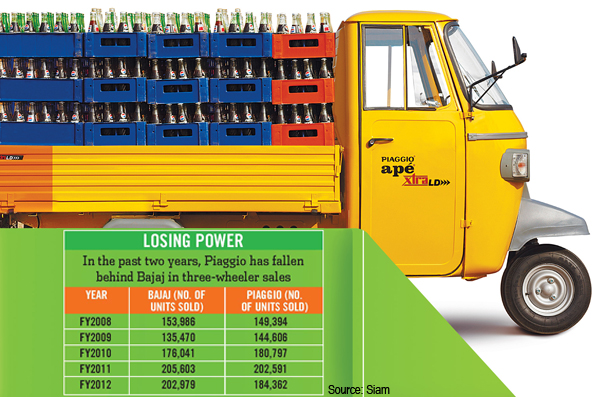 So why did Piaggio lose pole position? "We fell behind the competition primarily because we did not have a suitable product and a solution for the three-wheeler segment using alternate fuels, which are largely dependent on permits in different states," admits Chopra.

Non-issuance of permits hit Piaggio's leadership in diesel three-wheeler sales in Tamil Nadu (TN). From 8,000-10,000 permits every year, it is down to zero now. In Andhra Pradesh (AP), the Telangana crisis led to lower government spends, impacting buying power and jobs in rural areas. Piaggio used to sell more than 3,000 units a month in AP; it is under 2,000 units now. TN and AP accounted for nearly 13 per cent of Piaggio's total three-wheeler sales.

break-page-break
Three Versus Four?
In FY2012, Piaggio witnessed a fall of 8 per cent in cargo vehicle sales for the first time in the four fiscals. The gap in three-wheeler sales between Piaggio and Bajaj stands at 18,617 units; up from the 3,012 units in FY2011. "Our strategic direction proved to be right in both FY2011 and FY2012. Despite negligible cargo sales, we are market leaders in three-wheelers," says R.C. Maheshwari, president-commercial vehicles at Bajaj Auto.

Experts believe the growth in 4-wheeler small commercial vehicles has dented the 3-wheeler industry; cannibalisation has also led to a decline in 3-wheeler sales in the last fiscal. It is a slugfest out there. Bajaj plans to launch its ultra low-cost 4-wheeler RE60, which was showcased at Auto Expo 2012; Piaggio has Ape Truk, Ape Truk Plus and Ape Mini. They also have to share space here with Tata Motors, Ashok Leyland and Mahindra & Mahindra.

Yet, Chopra sees it as a temporary phase. Maheshwari agrees: "Though 4-wheeler commercial vehicles have created the market for inter-city transport (cargo), 3-wheelers will witness growth due to their popularity for intra-city usage." Better return on investment, more mileage and lower maintenance costs will ensure three-wheelers survive. A three-wheeler gives you, on average, around 30-35 kmpl; a four-wheeler about 20-22 kmpl.

Focus On Strengths
Bajaj has chosen to focus on the three-wheeler passenger segment. It has nine offerings — RE 2S, RE 4S and Mega Max — in the passenger segment to Piaggio's two — Ape Extra, Ape City. "In the two fiscals, we sold a lower number of three-wheelers because we did not fight in the cargo segment... We shifted our focus to passenger vehicles. The declining cargo segment does not figure in our business plans," says Maheshwari.

"Three-wheelers are increasingly becoming passenger transport vehicles. Positioning of the brand is a big advantage for Bajaj, which is already a popular brand in the two-wheeler business," says Abdul Majeed, partner, Price Waterhouse.

Chopra agrees on the potential of the alternate fuel-based three-wheeler passenger segment, but adds: "As of now, we are not playing in this market." Piaggio is more keen to regain its leadership in the cargo segment. It will roll out a fuel efficient, low-emission and compact three-wheeler powered by alternate fuels in July-September 2012.

Though lower in priority, it is also working on the launch of a small-body passenger 200 cc three-wheeler using alternate fuels by July 2012 to enhance volumes of the Ape. A state-of-the-art, fuel-efficient engine is also under development for powering this new vehicle.

Piaggio also has an eye on exports to Africa, Latin America and Sri Lanka. At present, exports are about 25,000 units per annum. "We hope to substantially increase export numbers with the arrival of the new small body petrol, CNG and LPG vehicles", says Chopra. The firm, which also owns well-known two-wheeler brands such as Vespa, Aprilia, Scarabeo, Moto Guzzi, Gilera, and Derbi, has the capacity to produce 1,000 three-wheelers a day at its plant in Baramati. It can produce 216,000 units of three-wheelers, 53,400 units of four-wheelers and 100,000 petrol engines per annum. The facility also houses a new two-wheeler manufacturing unit for the Vespa.

Among Piaggio's plans for the future are light commercial vehicles (4-wheelers) with capacities of half tonne, less than one tonne and 1.5 tonne. Can it get back atop the greasy pole?