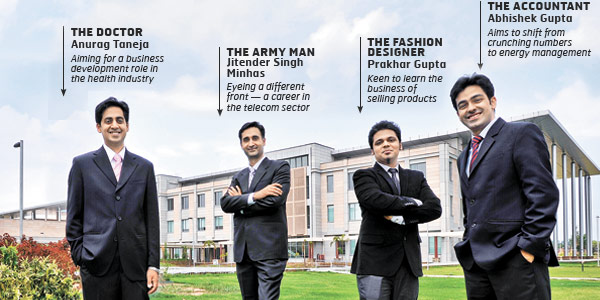 08 November, 2014
Print this article Font size -16+
When V.K. Menon, director, Indian School of Business (ISB), came across Keisuke Matsumoto’s application, he wasn’t too sure whether a Japanese monk would have what it takes to fit into an Indian MBA school. Menon was proved wrong. “He floored us,” he recalls.

Though around 80 per cent of MBA seats continue to be filled by engineers and, predominantly by men, institutes are beginning to realise the importance of a healthy mix of students. But it’s a work in progress. In this respect, Ivy League institutes like Harvard Business School and Stanford have, though tacitly, striven hard to usher in diversity on campus, both in terms of students’ background as well as geography.

Of the current batch of IIM Ahmedabad, more than 90 per cent of the students are engineers. However, occasionaly you do stumble upon a journalist, or a chartered accountant in the batch. But, the fact is that diversity remains a far cry, given the structure of the entrance test, that appears to be tailor-made for engineers to dominate.

“I personally believe just being good at mathematics and quantitative analysis does not make one a great manager,” says Mala Sinha of Faculty of Management Studies (FMS). To set right the skew, institutes like ISB have begun, in right earnest, the quest for diversity — of backgrounds, gender and age. Says Menon: “If participants come from the same background, they will think alike and there will be no value addition in a classroom.”

Most IIMs too have begun giving about 70-75 per cent weightage to Common Admission Test scores, 10-25 per cent to academics and, in the last couple of years, 2-5 per cent to factors like gender and academic diversity. For instance, IIM Calcutta awards three additional points to non-engineers and two points to women. IIM Lucknow and Kozhikode too give out additional points for diversity. In fact, IIM Lucknow and Bangalore have seen a record number of women students in their batch of 2012-14.

The one aspect of diversity where management schools have made strides is on the age front. While colleges like ISB get applications from people with between two and 22 years of work experience, IIMs have a separate course for executives to cater to the 30-plus age group.

Take for instance, the case of Colonel Jitender Singh Minhas, 45. After an army stint spanning 22 years, in which he fought on the border and trained Zambian and Botswanian armies, he aims to switch to a career in the telecom sector following an MBA.

Not everybody is, however, keen on experience. “A student with 10 years of experience will have a very different perspective,” says P.C. Biswal of MDI, Gurgaon.

While a management degree for an engineer is deemed a natural progression, others too are finding it to be of great value. Fashion designer Prakhar Gupta, 25, from the National Institute of Fashion Technology, feels a management degree is key to a startup. “As a fashion designer I know how to make products but I want to learn how to sell them,” he says. For Dr Anurag Taneja, 33, an MBA holds the promise of a shift to a business development role in a health company.
It’s early days, but B-schools are on the right track.