The Rich Get Poorer 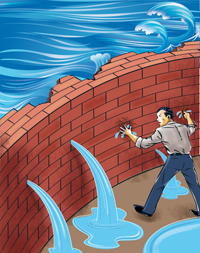 The continuing economic slowdown — let's not forget that the wealth of our richest families comes from their businesses — has had an impact on their behaviour. Talking to people across a spectrum, from the billionaires to advisors and wealth managers to researchers, the overarching objective seems to be wealth protection.

In reviewing the state of the country's wealthy, consider two principal perspectives. One, what does it mean from an individual behavioural perspective? Two, is the current downturn a short- or long-term phenomenon?

"We tend to overreact in the short term," says Mukand Rajagopalan, principal at the Boston Consulting Group's India office. "In the coming years, India and China will continue to be the countries where wealth will be generated."

As he puts it, even at the bottom of the pyramid, income levels continue to rise; in the agricultural community, greater productivity for farmers with 3 acres of land or less has resulted in a four-fold increase in income.

In cities — where most of the super rich reside — there is a spurt in the variety and number of services available. That reflects a fundamentally higher growth trajectory; per capita incomes could double, even triple, in short order.

Entrepreneurship continues to be the dominant source of new wealth. As the report by Kotak Wealth and Crisil Research says, rapid expansion of IT-related services and financial services industries has catapulted many middle-income households into the high net worth category. And as much of their wealth is recent, they tend to be conservative, and seek advice on how to protect it. Wealthy business families, too, are taking a hard look at how the economic environment could impact their hard-earned wealth.

"In the managed asset portfolios, the majority is in fixed income, and with shorter maturities," says Ajay Bagga, managing director of wealth management at Deutsche Bank in Mumbai. "They want visibility of returns and liquidity."

W(h)ither Wealth Management?
The wealth management industry has undergone restructuring too. Many brokerage firms that offered wealth management services in boom times have all but disappeared. Several international firms that came at the beginning or middle of the last decade have either scaled back, or are considering an exit. Analysts say, for instance, Bank of America Merrill Lynch wants to sell its wealth management business.

Blame the cost/income structure: the wealth management business needs about Rs 4,000 crore in managed assets for the cost-to-income ratio to fall below 1. Vintage helps, as does the ability to provide additional services, such as tax advisory, estate planning and so on. That requires expensive talent. Besides, most Indian families are now putting together family offices to oversee aspects of managing family wealth.

"A limited range of standard products and imported business models do not work particularly well in the Indian context," says Bagga. "Rich Indian families like adaptability; and they are very cost conscious."

Trust is a critical criterion. Many business firms have family offices and advisors who mediate between the family and wealth management firms. "The range of products has to go beyond debt, equity and derivatives," says the head of one firm who requested anonymity (structured products have become unpopular). "Otherwise, the client will go elsewhere."

The Bold And The Restless
Some already do. Take real estate. Many ultra-high net worth individuals (UHNIs) — industry parlance for the very rich — buy into the equity of housing projects under construction, or lend to developers at high rates of return. "It is a collateralised asset, and the HNIs/investors are willing to wait," says a wealth manager. Even undeveloped real estate and just land are other big-ticket buys. Somehow, the faith in the coming-soon rebound of the economy remains high.

As an investment, gold is a perennial favourite. But now there is a new one: diamonds. The logic is that diamond prices have gone up by over 50 per cent, say analysts, over the last three years. "Compare that to the fifth straight year that stockmarkets have performed badly," says the head of a wealth management firm.

If you were to go by spending patterns, not much has changed since 2008, according to most wealth survey reports. The Super Rich continue to splurge on travel, high-end branded apparel, luxury watches, second and even third homes. The Kotak Wealth and Crisil report lists an anecdote about an industrialist who is refurbishing a 30-storey building in Mumbai into a residence, a la Antilia, Mukesh Ambani's home.

Spreading the wealth is not yet very fashionable among the Super Rich, though. For those who do, the approach has been to set up sustainable endowment models. Professionals among the Super Rich give away as much as 10 per cent, the inheritors about half of that. They can't take it with them, but they can keep it for a long, long time.